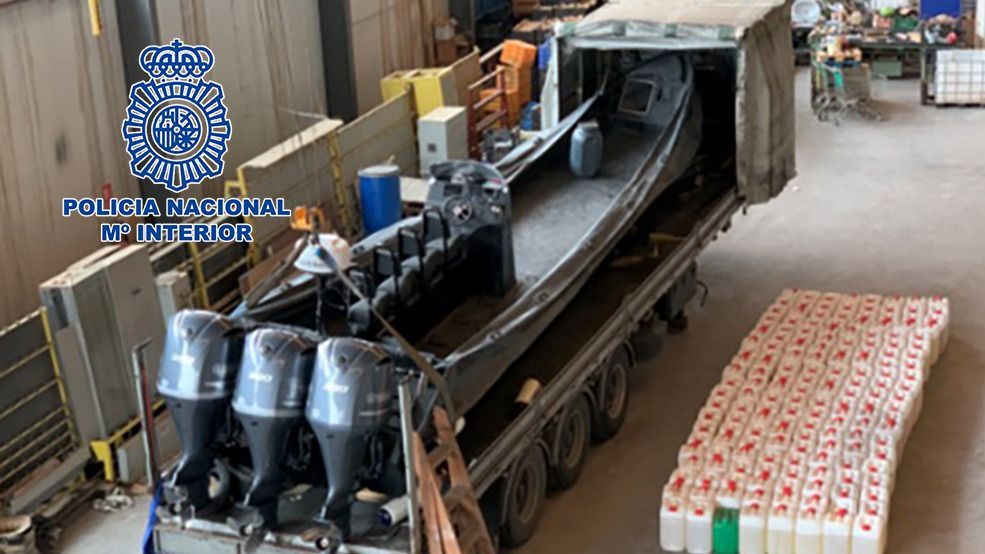 The criminal organization dismantled by the National Police was based on the coasts of Malaga and Cadiz and, presumably, was engaged in drug trafficking through the preparation and conditioning of narcolanchas for the maritime transport of hashish from Morocco.

Once imported, the substances were hidden in industrial warehouses for rent to later be transported by truck to countries such as France, Belgium and the Netherlands. The framework had a network of collaborators in Andalusia, Extremadura, Murcia and the Valencian Community.

The ‘Viñas’ macro-operation has been carried out in nine operational phases and has culminated in 21 people arrestedin addition to the intervention of 296 kilograms of vacuum-packed marijuana buds hidden among lettuce in a refrigerated truck, 80 kilograms of hashish found in a false bottom in the cargo doors of a trailer, eight boats, half a dozen outboard motors , four trailers, three truck heads, 4,200 liters of fuel and some 16,000 euros in cash, among other items.

The investigation began in mid-2021 after the detection of a criminal group allegedly dedicated to hashish trafficking in large quantities. To develop the illicit activity, the plot was provided with boats with powerful engines that allowed them to make quick journeys between the coasts of Campo de Gibraltar and Morocco -place of origin of the substances-.

The agents verified that the police pressure on the coasts of Malaga and Cadiz would have led the organization to spread to other areaswith an extensive network of collaborators in Almería and the regions of Extremadura, Murcia and the Valencian Community.

According to the proceedings carried out, the plot rented ships -with no apparent commercial activity- where they conditioned the narco-boats with powerful engines, navigation systems and, ultimately, the electronics and elements necessary for the voyage.

Once the boats are ready, were transported in trucks and trailers to the shores of the Campo de Gibraltar where they were thrown into the sea. The drug imported from Morocco was later hidden in the ships and prepared in trucks that left by road to European countries such as France, Belgium and the Netherlands.

In one of the initial phases of the ‘Viñas’ operation carried out in a industrial building in Corbera (Valencia), The agents seized 296 kilograms of vacuum-packed marijuana buds in different bags hidden among lettuce, inside a refrigerator trailer, and arrested the driver and his companion.

In another later phase developed in Murcia, the agents intervened in 40 packages of hashish with a total gross weight of 80 kilograms in the double bottoms of the doors of a trailer. The phase concluded with eight detainees and seven searches in Murcia, Almería, El Ejido and Córdoba.

The investigation was extended until recent dates with a total of 21 people detained for their alleged responsibility in the crimes of drug trafficking, money laundering, smuggling and belonging to an organization crime, and the intervention of extensive logistics for drug trafficking: eight boats, half a dozen outboard motors, four trailers, three truck heads, a crane to move pneumatic boats, 4,200 liters of fuel, among other effects.

Likewise, a patrimonial investigation was carried out on those investigated that allowed the prohibition, by members of the plot, to alienate and dispose of a fleet of 45 vehicles -valued at 1,472,000 euros- and a property valued at another 150,000 euros.

Rihanna could return to music next November

check the results of Daily Coupon and Super ONCE

Petro appoints Alejandro Gaviria in Education and delves into his moderate profile
July 8, 2022

Alignment of the FC Barcelona against the Inter in the party of Champions League today
October 3, 2022

Russian reservists: Putin orders a partial mobilization in Russia to face the counteroffensive in Ukraine | International

Aragonés appoints former leaders of the PSC and Podemos as ministers in his new Government alone
October 9, 2022

“Friend”, the nickname with which Odebrecht referred to Lula to record bribery payments
October 1, 2022

“Friend”, the nickname with which Odebrecht referred to Lula to record bribery payments

Álvaro Uribe: “We will contribute to making Petro’s government a social democracy”
September 28, 2022

Álvaro Uribe: “We will contribute to making Petro’s government a social democracy”

Ukraine and Russia achieve the first advances in the negotiation to unblock the Ukrainian grain | International
July 13, 2022

Ukraine and Russia carry out the largest prisoner exchange since the beginning of the war | International
September 22, 2022

Two other high officials of the Government of Boris Johnson, accused of sexual harassment | International
September 2, 2022

Two other high officials of the Government of Boris Johnson, accused of sexual harassment | International