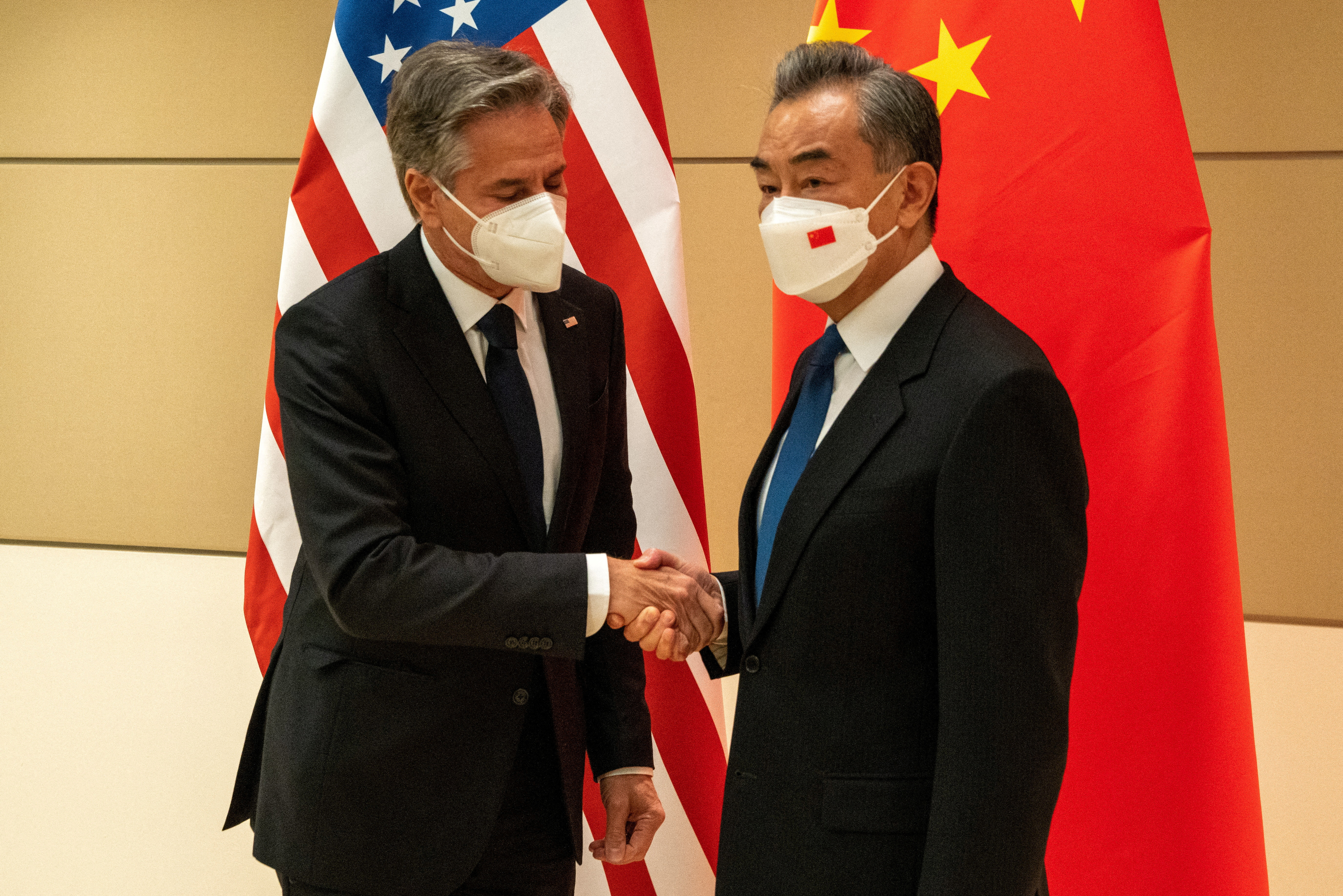 The representatives of the diplomats of the United States and China, Antony Blinken and Wang Yi, respectively, met this Friday at the United Nations to try to reduce tensions around Taiwan after two months in which the friction between the two powers around to the self-governed island have only increased. Both, according to Washington, have agreed to keep the lines of communication between the two countries open. And the American has stressed to the Chinese that it is “vital” to maintain peace and stability in the Strait of Formosa.

The meeting began with a handshake between the Secretary of State and the Foreign Minister. Neither of them wanted to answer the questions put to them by the journalists present in the room at that moment. The State Department had indicated, in a statement prior to the meeting, that the meeting was part of Washington’s efforts to “keep the lines of communication open and responsibly manage the competition” between the two nations.

“For our part, the Secretary of State made it crystal clear that, in accordance with our one-China policy – which, we insist, has not changed – maintaining peace and stability across the Straits is vital, absolutely important.” said a senior US official, who spoke after the meeting on condition of anonymity.

In a more than symbolic gesture, immediately before the meeting with Wang, Blinken had met with his counterparts from the so-called Quad, the informal alliance between the United States, Japan, India and Australia that Beijing believes is aimed at preventing the Chinese rise. “Our four countries know very well that the significant challenges that we face, as well as the opportunities that are presented to us, demand our collaboration more than ever,” said the Secretary of State, in the signing of an agreement on cooperation in assistance in cases of natural disasters.

It was the first time that Blinken and Wang had seen each other face to face since their meeting in Bali, Indonesia, in July, during a meeting of foreign ministers of the G-20. At the time, both senior officials had declared their intention for a more fluid relationship, despite friction – and deep mutual mistrust – in almost every area of ​​interaction, from Taiwan to trade, with the fight against climate change among the few and relative caveats. Wang has met this week in New York with the US envoy for climate change, John Kerry, despite the fact that in the midst of escalating bilateral tensions last August, Beijing announced that it was laying fallow climate cooperation.

But after that declaration of good intentions came what Beijing interpreted as a diplomatic torpedo against its waterline: the visit to Taiwan of the president of the House of Representatives in Washington, Nancy Pelosi. The third person in the line of presidential succession was the highest US authority to visit the island that China considers an inalienable part of its territory and whose unification it wants to achieve by hook or by crook.

Beijing responded to that visit with military exercises with live fire in the waters of the Strait of Formosa, which were interpreted in Washington as a kind of rehearsal for a hypothetical invasion in the future. And, when the tensions seemed, if not silenced, at least numb, the US president, Joe Biden, declared in an interview with the program 60 minutesissued last Sunday, that US soldiers would defend Taiwan in the event of a Chinese attack.

It was not the first time that Biden expressed himself in these terms. Some terms that contradict, at least in appearance, with the official policy that the United States has observed for more than 40 years in the area. It is the so-called “strategic ambiguity”, for which it does not confirm whether it would help defend Taiwan in the event of an attack, so as not to give wings to possible temptations by Taipei to declare formal independence; but it does not rule out that help either, to dissuade China from a military aggression against the island with a democratic system and a government ideologically aligned with Washington.

On each occasion that Biden has gone off the official script, the White House has been quick to ensure that there is no change in the strategic ambiguity and that US policy remains unchanged: in what it defines as the “one China policy.” , recognizes Beijing as the legitimate government of China, but considers that the status of Taiwan is yet to be defined. The same thing happened on Sunday: the spokesmen immediately came forward to maintain that Biden had limited himself to answering a hypothetical question, and had not turned the official position 180 degrees.

Despite the nuances, in the corridors of government institutions in Beijing there is an increasing conviction that, openly or not, the United States has broken with its policy of ambiguity. One more factor that fuels Chinese mistrust of Washington.

In a speech to the Asia Society, a thinktank specializing in Asian studies in New York, Wang had reiterated Beijing’s warnings about Taiwan. “Taiwan independence is like a highly aggressive gray rhinoceros that charges at us and must be decisively stopped,” the minister said. “We have always worked with the utmost sincerity and effort for peaceful reunification, but we will never tolerate any activity aimed at secession.”

And he stressed, as on previous occasions, that “the Taiwan question is becoming the great risk in Sino-US relations. If mistakes were made in its management, it would most likely destroy bilateral relations.” He also compared Taiwan to Hawaii, the archipelago that is one of the states that make up the United States: “Just as the United States would not let Hawaii be torn from it, China has the right to maintain the unification of its territory.”

Neuquén: Three dead in a refinery fire in southern Argentina

War in Ukraine: Young Ukrainians chain crisis: “The near future? Get the enemy out of here” | International
May 10, 2022

War in Ukraine: Young Ukrainians chain crisis: “The near future? Get the enemy out of here” | International

Mercadona’s healthy alternative to this product that we use every day
October 6, 2022

FC Barcelona – Inter Milan: schedule and how to watch the Champions League online live and on TV
October 12, 2022

FC Barcelona – Inter Milan: schedule and how to watch the Champions League online live and on TV

War: Biden meets in Poland with the Ukrainian defense and foreign ministers | International

“What lesson did the girls from the Colegio Mayor give to the politicians”
October 8, 2022

Daniel Ortega culminates the coup against the newspaper ‘La Prensa’ with the seizure of its historic building | International
August 25, 2022