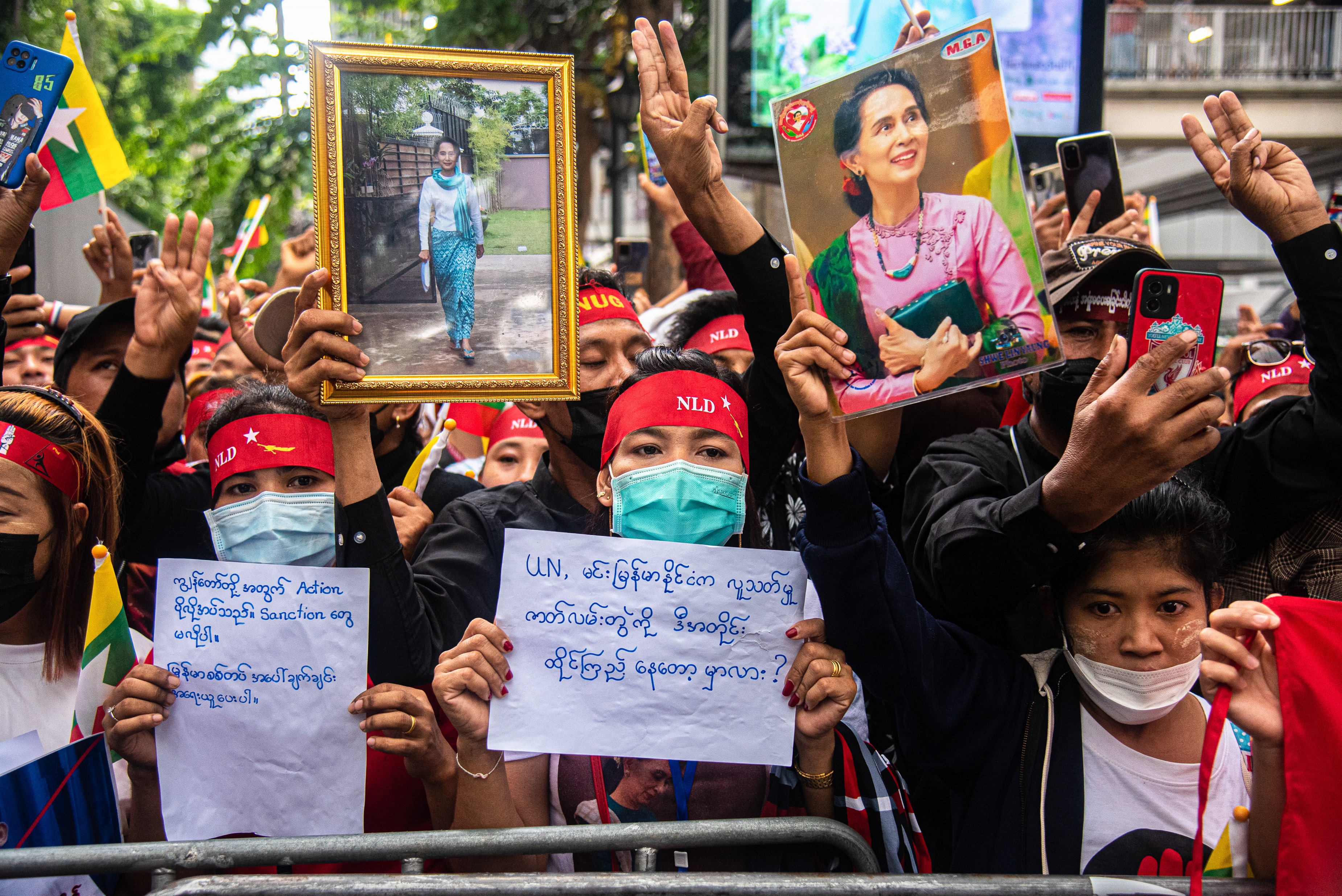 The Myanmar military junta has sentenced the Nobel Peace Prize winner, Aung San Suu Kyi, to three years in prison and forced labor for alleged electoral fraud. It is the umpteenth sentence imposed on the 77-year-old former leader, and with which she adds 20 years in prison for accusations of alleged crimes such as illegal importation and possession of walkie talkies, violation of coronavirus restrictions and incitement to public disturbances among others. Political analyst David Mathieson declared: “Suu Kyi is the sworn enemy that the military junta wants to humiliate and eradicate forever.”

General Min Aung Hlaing’s dictatorial regime ended a 10-year democratic transition three months after the 2020 elections. Military forces jailed Suu Kyi and her fellow party members, the National League for Democracy (NLD), the deposed president Win Mying and Union Government Office Minister Min thu at a Naypydo jail. These three members of the party have been sentenced for the alleged finding of 2,000 repeated votes in the November 2020 elections.

International observers endorsed the landslide victory of Suu Kyi’s party and described the vote as “representative” of the will of the Myanmar people, just like in 2015. This has not stopped Min Aung Hlaing from using alleged fraud in the elections. to legitimize their seizure of power.

Suu Kyi was placed at the end of June in prison confinement in Naypido, the place where she has been held since the coup, and where the trials against her and members of her party continue.

The military court has carried out the proceedings behind closed doors and has prohibited its lawyers from speaking with the press and international organizations. Suu Kyi’s lawyers have described all the accusations made against her as fabrication. Human Rights specialist Manny Maung has stated: “These closed-door hearings do not determine the credibility of Aung San Suu Kyi’s convictions.”

The UN and ASEAN special envoys have failed to see the former president during their recent visits. This is a symbol of the failure of the diplomatic efforts undertaken in recent months and is one more indicator of the chaos that the country is experiencing.

The coup d’état has plunged Myanmar into a strong political, social and economic crisis and has opened a spiral of violence where new civil militias have exacerbated the guerrilla war that the country has been experiencing for decades.

Min Aung Hlaing has promised to hold elections in 2023 as soon as the country is “peaceful and stable” and has announced a “reform” of the electoral system. The United States Secretary of State, Antony Blinken, has asked the international community not to support this project and has described it as an “electoral farce”.

The brutal repression by police and soldiers against peaceful and unarmed protesters since the coup has left more than 2,000 dead and more than 15,000 arrested, according to the Burmese NGO Association for the Assistance of Political Prisoners.

Péter Szijjártó: The Hungarian Foreign Minister: “Someone has to pay the cost of replacing Russian oil” | International

NATO and EU: Europe is reluctant to completely and immediately corner the Putin regime | International

The 517 days of Isabel without Felipe: the slow fall of the queen after the death of her inseparable husband | People
September 10, 2022

The 517 days of Isabel without Felipe: the slow fall of the queen after the death of her inseparable husband | People

Last minute of the war today, live | Zelensky: “Before we talked about peace, now we talk about victory”
August 24, 2022

Last minute of the war today, live | Zelensky: “Before we talked about peace, now we talk about victory”

Atlético needs to avoid a disaster

Video analysis | Is Macron’s power in danger with the legislative elections in France? | on video
June 14, 2022

Video analysis | Is Macron’s power in danger with the legislative elections in France? | on video

Brazil opens the election campaign that is a heads-up between Lula and Bolsonaro | International
August 17, 2022

The EU is confident that the relationship with London will improve after the departure of Boris Johnson | International
July 8, 2022

Thousands of citizens say goodbye to Elizabeth II through the streets of London | International
September 19, 2022

The Government of the Balearic Islands and the City Council of Palma, in a hurry
October 6, 2022

The Government of the Balearic Islands and the City Council of Palma, in a hurry