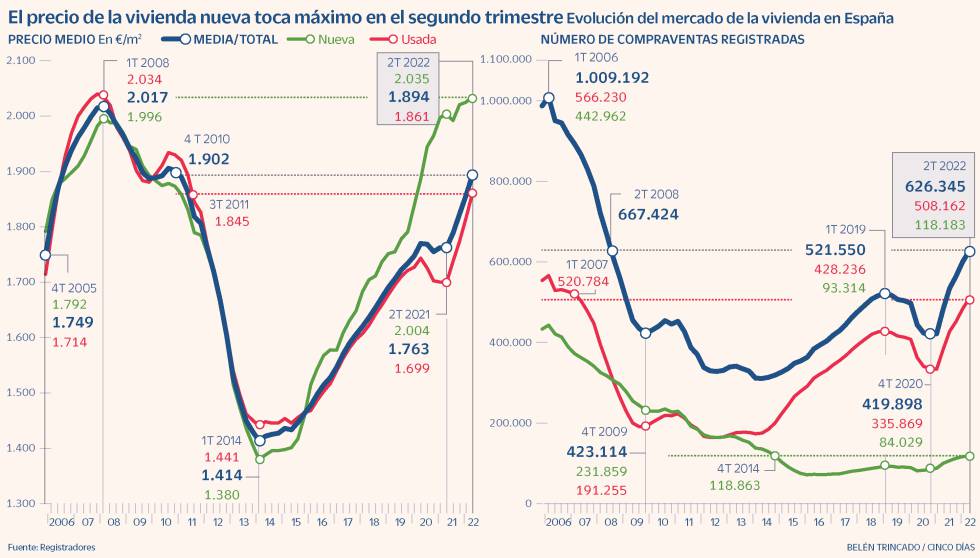 The Spanish real estate market continues to heat up quarter after quarter as average house prices and the number of registered purchases increase relentlessly, gradually approaching the maximum levels prior to the bursting of the real estate bubble and, in cases such as the value of the new work, far exceeding them.

On the one hand, the average cost of houses between April and June reached 1,894 euros per square meter, according to the latest annualized results, “more structural”, offered by the College of Registrars of Spain. The figure, the highest since the end of 2010, represents a quarterly increase of 2% and an annual increase of 7.5%. On the other hand, at the end of the second quarter, more than 625,000 purchase and sale operations had been recorded in the last 12 months, 4.5% more than in the immediately previous period and 14.3% more than in the same quarter of the year 2021. In this case, according to the data, it would be necessary to go back to 2008 to find a higher amount.

The direction that the market is taking, however, becomes more palpable when analyzing separately the age of the houses transferred. While the square meter of second-hand houses reached 1,861 euros in the second quarter, a figure not seen since the end of 2011, that of new-build properties rose to 2,035 euros, in this case a record for the entire series historical.

The main causes behind this rebound are found in the inflationary crisis – since the runaway rise in the prices of materials has transferred part of the extra cost of the work to the final value of the property – and in the lack of specialized labor, which also makes promotion more expensive. In parallel, the low supply of new construction, unable to absorb demand, in turn boosts second-hand prices to record year-on-year increases that reached double digits in June.

Suffice it to point out that in May 2022, the last month with available official data, 7,600 new construction visas were recorded in Spain compared to the more than 23,000 registered in May 2008, almost 70% less.

The experts consulted acknowledge that it is still early to venture when the market will begin to stabilize. The spokesperson for the Idealista real estate portal, Francisco Iñareta, emphasizes that the current moment continues to be one of “absolute uncertainty”, so that the forecasts for the short and medium term lack great validity for now. From Bankinter’s Analysis and Markets department, for its part, they still do not see “signs of overheating” in prices, since the effort rates of households are well supported and are at acceptable levels, something that is also corroborated by the registrars themselves. According to their data, for example, mortgage payments on salary closed the second quarter at around 30%, within the limits that are considered acceptable so as not to speak of overexertion.

Inflation and interest rates, experts acknowledge, are the two factors to keep an eye on when it comes to seeing how both operations and prices evolve.

The real estate consultancy CBRE, for now, believes that the cost of construction materials is close to peaking, so “it will begin a gradual downward path in the coming months.” Specifically, it is expected that this gradual adjustment in construction costs will be reversed by a third of the increase registered in the last two years. This, according to Joan Pina, director of Econometric Forecasting at CBRE, will allow long-term equilibrium levels to be reached again. “The end of the rise in construction costs, and their subsequent decline, will help alleviate the consequences dragged on in recent months. We trust that the current extra cost will end up being completely absorbed in 2025”.

The stabilization of the market could give rise, therefore, to prices beginning to moderate in the most valued markets in Spain. According to the registrars, the square meter already ranges between 2,951 and 4,992 euros in capitals such as Bilbao, Palma, Madrid, Barcelona and San Sebastián, which in the second quarter of the year recorded annual increases of up to 12%.

The Civil Guard eliminates Geography, History, Literature and Mathematics from its oppositions

This is Ricardo de Burgos Bengoechea, the referee who whistles the final of the 2023 Spanish Super Cup

Facebook Twitter WhatsApp Telegram
Back to top button
Close
Featured Posts
Nuevo Amanecer: in the epicenter of Chile that does not have its own home | International
April 18, 2022

Nuevo Amanecer: in the epicenter of Chile that does not have its own home | International

How fertilization and pesticides are destroying bubbles | Science
March 9, 2022

How fertilization and pesticides are destroying bubbles | Science

Mélenchon urges the French left to close an agreement for the legislative elections | International
May 1, 2022

Barça line-ups and where to watch the Champions League live
October 12, 2022

Barça line-ups and where to watch the Champions League live

A horror ending for Dom Phillips and Bruno Pereira in the Brazilian Amazon after 11 days of agony | International
June 17, 2022

they are healthy and amazing
October 5, 2022

they are healthy and amazing

“It is pummeled to scratch votes”

China ends the maneuvers around Taiwan, but toughens its demand for reunification with the island | International
August 10, 2022

China ends the maneuvers around Taiwan, but toughens its demand for reunification with the island | International