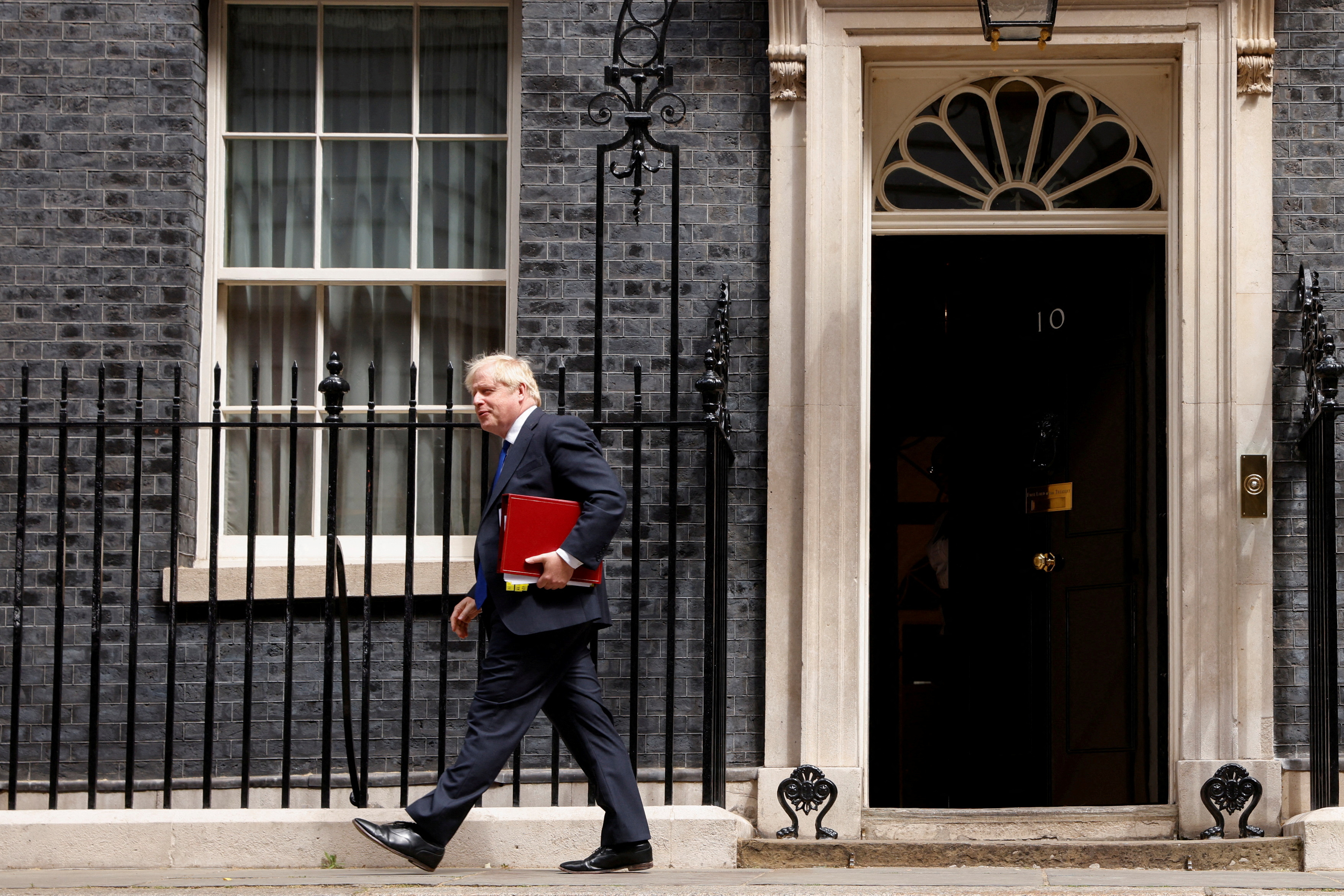 How did that character in the novel respond? PartyIn Hemingway’s, Boris Johnson’s downfall came “gradually, and then suddenly.” In the most tragic and dizzying 24 hours of the career of Britain’s most popular Conservative politician in decades, the pent-up rage against him by many fellow party members has finally turned into a barrage of stabbings in the back. It is no longer a question of whether Johnson will leave Downing Street, but how he is going to do it, willingly or by force.

This Wednesday, mid-afternoon, a delegation of government ministers awaited the prime minister in Downing Street with a clear and resounding message: the time had come for him to do the right thing and resign. Johnson was returning from a long parliamentary day where he had suffered punishment and ridicule from the opposition, but also from many of his own deputies. In the group of emissaries were Chris Heaton-Harris, the head of the conservative parliamentary group (with ministerial rank); Brandon Lewis, the minister for Northern Ireland; Simon Hart, minister for Wales; Grant Shapps, Minister for Transport; and, surprisingly, Nadhim Zahawi, the man whom Johnson had appointed hours earlier as Minister of the Economy – the most important government post after that of Prime Minister – to try to stop the first impact of the hemorrhage. Zahawi accepted the post – a fantastic political springboard – but joined the Ides of March against the prime minister.

In coordination with the delegation of ministers that delivered the final verdict to Johnson, the executive of the 1922 Committee had met. This body, which brings together Conservative deputies who do not hold any position in the Government —freer when it comes to making their voices heard his voice—has the power to organize a motion of internal censure against the leader of the Conservative Party in government, and to launch the primary process if the motion succeeds. Under the current rules, a new motion cannot be held before a year has passed since the previous one. Johnson overcame the challenge in early June, although 148 deputies – 41% of the conservative parliamentary group – demanded his replacement. A very hard blow from which, even so, he hoped to recover. But the 1922 Committee, and its president, Graham Brady, were already aware this Wednesday that the die was cast, and that it was a large majority of Tories who wanted Johnson to throw in the towel. Although for the moment they have decided not to change the rules of the game, a new executive will be elected on Monday, and it will probably be this one that changes the procedure to speed up the holding of a new motion. Shortly afterwards, Brady joined the delegation of ministers in Downing Street to personally explain to Johnson the gloomy mood within the Conservative Party.

In the British government ladder, the so-called parliamentary private secretaries are those deputies who act as a link between Parliament and a minister. They are the ultimate rank (called derogatorily bag carriers, those who carry the briefcase to the minister), but their resignations add noise and tension to the crisis. In the last hours, many of them have resigned, along with some commercial envoys to countries such as Morocco or Kenya, and government advisers. In total, the resignations of conservatives who, in one way or another, are at the orders of the Government, amount to almost forty. Former Conservative Prime Minister David Cameron did not have in six years of mandate that number of abandonments in government positions that Johnson has caused in just 24 hours.

This Wednesday, the British Prime Minister faced a Labor opposition that was already openly calling for new elections and was spreading the shadow of corruption over the entire Conservative Party. The most important thing, however, was the degree of support, of fuss, of cries of support, in the bench of theirs. Except for three conservative deputies who have asked for the floor to openly criticize Johnson, the rest have opted for a revealing silence of his discouragement. “The work of a prime minister, in difficult circumstances, when he has received from the polls a colossal mandate [en referencia a su amplia victoria de 2019] is to move on, and that is what I am going to do, ”said Johnson, to try to make it clear that he does not contemplate a resignation.

A few hours before his speech in Parliament, the Prime Minister had to listen to how Michael Gove, the Minister of Housing -but, above all, the most astute politician and man for everything in the Government-, told him in a tense meeting that ” the game had come to an end” and recommended that he resign. Gove’s second stab at Johnson. When in 2016 both participated in the Brexit referendum, and they won, Gove promised to collaborate with Johnson in his aspiration to replace Prime Minister David Cameron, who had just resigned, at the head of the Government. Hours before launching the campaign, Gove publicly announced that he did not consider his friend qualified for the job, and announced his own candidacy. Shortly after, Johnson retired.

During the session of the Parliament, the ex-minister Sajid Javid has intervened to explain the personal reasons for his resignation. “I’m afraid the ‘reset’ button only works a few times. You can only turn the machine off and on a limited number of times before you realize something is wrong. We have the problem at the top, and the time has come to say enough is enough”, Javid assured before the silence of his colleagues and the disgruntled face of Johnson, whom he accused of having lied on numerous occasions and lacked due integrity. Historical echoes of the famous speech in the House of Commons by Geoffrey Howe, the politician loyal to Margaret Thatcher who, with his abandonment of the Government, drove the last nail into the coffin of the Iron Lady. “Walking the tightrope between loyalty and integrity has become mission impossible in recent months, and I will never take the risk of losing my integrity,” Javid said in a devastating speech heard in silence by his conservative colleagues. .

The cereal war in Ukraine is experienced in the countryside, decided in the ports and suffered in Africa | International

The eight most scandalous measures of the 2023 Budgets

Elizabeth II and her 14 US presidents: a special relationship | International

Verstappen’s accounts to be crowned champion at Suzuka
October 7, 2022

Verstappen’s accounts to be crowned champion at Suzuka

A sadness without tears or tragedies | International
September 10, 2022

A sadness without tears or tragedies | International

Monumental whistle blow to Grande-Marlaska in León during an act of the Civil Guard
October 9, 2022

“The main thing is always the person”

The rupture of the dialogue between the Government and the main indigenous leader deepens the crisis in Ecuador | International
June 29, 2022

Nicaragua: Arturo McFields: “I’m not a hero, I’m afraid, but I feel like I’ve removed an anvil from my soul” | International
March 24, 2022

Nicaragua: Arturo McFields: “I’m not a hero, I’m afraid, but I feel like I’ve removed an anvil from my soul” | International

Putin exhibits his harmony with Erdogan in the second meeting between the two in less than a month | International
August 5, 2022

Summit in Madrid: NATO speeds up the path of rearmament in the face of new threats | International
July 1, 2022

Summit in Madrid: NATO speeds up the path of rearmament in the face of new threats | International