Journalist Anna Fil, who met with Russian prisoners of war held by the Ukrainian army, conveyed her thoughts on the living conditions of the prisoners there and the war. While the soldiers stated that they were misled by the news broadcast on Russian television, someone’s statement “Obviously we were deceived” drew attention.

As the war launched by Russia against Ukraine leaves four months behind, the details of the events in the region are also being wondered. Finally, the German media outlet DW wrote about the conditions of the prisoners of war held by the Ukrainian army. DW reporter Anna Fil shared her impressions by meeting with prisoners of war with special permission.

PRISONERS ARE SEPARATED FROM OTHER DETAILS

of DW news in that:

“We are in a prison in Ukraine. The second floor is reserved for Russian prisoners of war. As DW, we cannot reveal the location of the building for security reasons. Russian prisoners are kept separately from other detainees. This is said to be “for their safety.”

DW became the first media outlet to speak to Russian prisoners in prison after an application made to the Ukrainian prisons directorate. We were allowed to report on the condition that we did not show the faces of the prisoners and did not share information about their whereabouts. We were also allowed to speak to prisoners of war who were not indicted for war crimes or other crimes. A separate permission from the prosecutor was required to speak with prisoners who were indicted for war crimes.

‘We have nothing to hide’

Seven men from different age groups sit in a cell. They are not surprised that journalists have come to visit them. They say that an official from the United Nations and the Red Cross arrives every week.

During our conversations with Russian POWs, prison officers accompanied DW reporters and allowed conversations with whomever they wanted. DW interviewed four detainees with their consent. All said they had served as professionals and had “nothing to hide”. 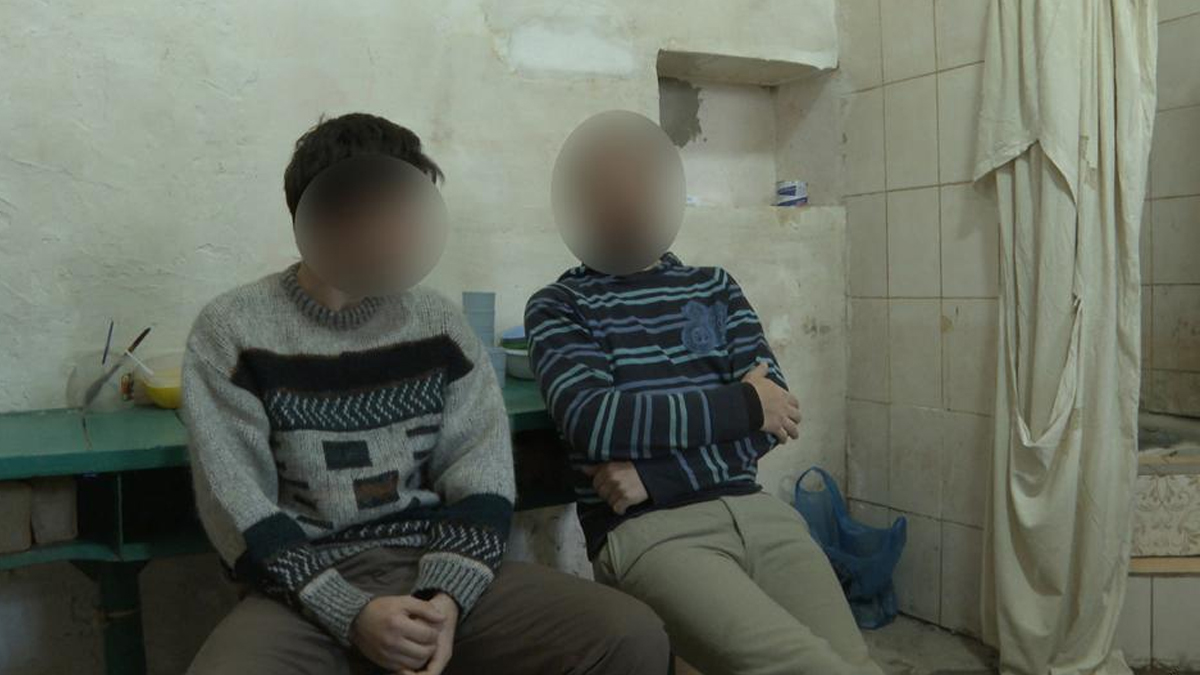 ‘WE HAVE BEEN DECEIVED’

First we talk to Roman, who hails from Viborg, Russia. “Obviously we were deceived,” says Roman.

“At first I was told it was about something humanitarian. But then I was immediately sent to the front.”

Roman, who was injured while fighting in the Kharkiv region of Ukraine, says the Ukrainian army took him with them and offered health care.

It was a conscious decision for Artyom, another prisoner of war, to participate in a “special military operation” against Ukraine. (Editor’s note: This is the official term used by the Kremlin for the war in Ukraine)

Artyom applied to an advertisement he saw on the internet and was sent to Donetsk, which is controlled by pro-Russian separatists. He learned to use the T-72 type tank in a few days and was sent to the Zaporozhian side. However, his tank was damaged and he was taken prisoner by the Ukrainian Azov Battalion. Artyom says he was given food and cigarettes, adding, “I have never seen a fascist.”

Asked why he went to Ukraine to fight, Artyom says, “It is said on TV that we are fighting for a good cause, but in reality this is not the case. But here I could understand it.” Artyom describes the Russian army as “looters and murderers”.

DAILY LIVES OF THE POWERS

The cells in the prison are furnished with old furniture. The cell is cramped but clean. There is a common table for all; plastic plates and metal cutlery on top.

Prison guards say that while prisons normally use plastic cutlery, the situation is different for POWs because they are not aggressive as most of them wait for a prisoner exchange agreement.

Lunch for Russians is distributed by a Ukrainian prisoner under the supervision of a guard. At lunch, borscht made of beetroot and buckwheat porridge are pushed in through a hatch under the cell door. The captives say it’s cornmeal with meat for breakfast. According to the meal plan in the prison corridor, 3 meals a day are provided. Prisoners are also allowed to roam outside and shower daily. 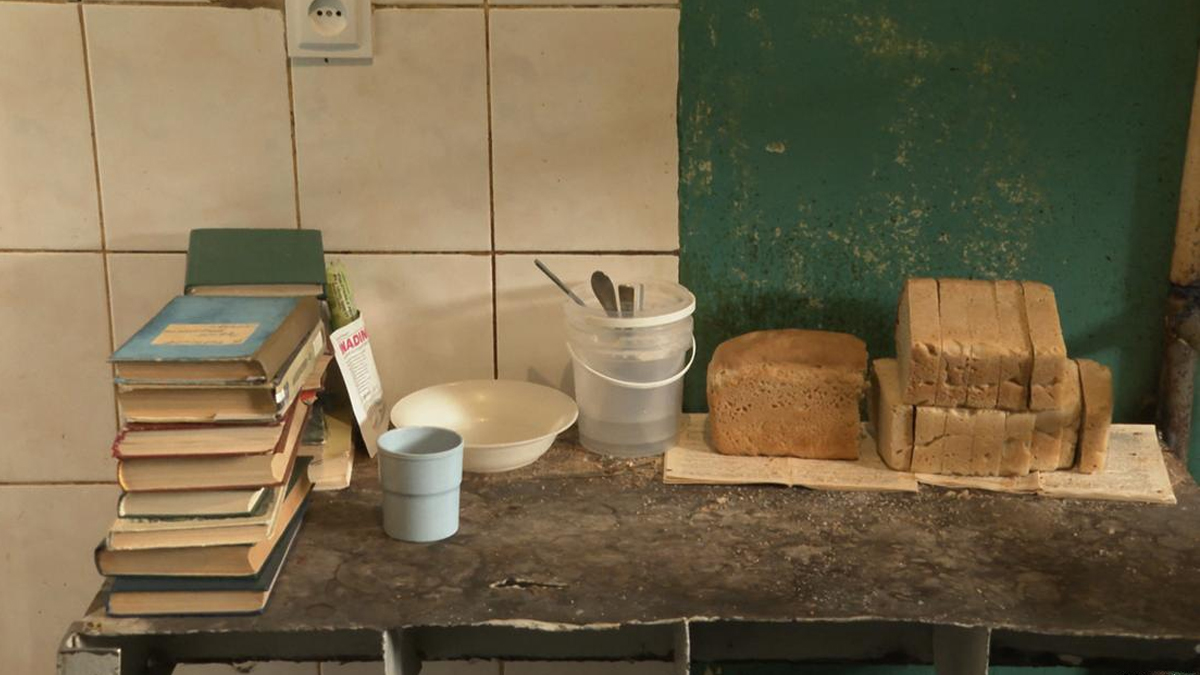 ‘WE BELIEVED THE NEWS ON TELEVISION’

In another cell are three men in their 20s. A pile of books beside their bed. Prisoners say they like to read detective novels.

Dimitri says he does not know that his unit went to Ukraine from Belgorod in Russia on February 24. “We weren’t told where we were going. When we entered the territory of Ukraine, we understood where we came from when we saw the signs and flags,” said Dimitri. “I asked my commander what we were doing here, and he said I shouldn’t ask unnecessary questions.” He says he surrendered to the Ukrainians when his tank was targeted near Chernihiv on February 27.

During our interviews with Dimitri and two other POWs, we were accompanied by a guard, a psychologist working at the prison, and other detainees. DW reporters had the impression that the presence of prison staff had no effect on the prisoners’ words or willingness to speak. The guards did not listen to the conversations, kept a distance and did not put pressure on the DW reporters.

DW reporters met privately in a separate room with Oleg, a prisoner from Russia’s Karelia region. He states that he renewed his contract with the Russian army in March. “We believed in the TV reports that we were going to go to Ukraine and help, that there were nationalists there who tortured and killed their own people,” says Oleg.

However, when they arrived near Kharkiv, they did not see any nationalists, and when they went to the villages, people said to them, “Get out of here! You have no business here!” conveys what he said. He says that when he signed his contract, he was promised training and not being sent to the front, but only three days later he was ordered to besiege the city of Kharkiv, where more than 1 million people live. His unit tried to return to Russia, but his commanders forbade it. After that, they lost contact with the commander and his unit was taken prisoner by the Ukrainian army soon after.

THEY SAY ‘WE DID NOT KILL CIVIL’

Prison officials tell that only a Russian soldier named Vadim S. confessed to shooting a civilian near Sumi while he was connected to a polygraph. On May 23, a court in Ukraine sentenced him to life in prison for war crimes. This was the first war crime-motivated verdict on Russian POWs in Ukraine.

THEY ARE GOOD LOOKED BECAUSE THEY MAY BE A POWER EXCHANGE

None of the prisoners DW spoke to mentioned poor prison conditions or inhuman treatment. According to the Ministry of Justice of Ukraine, about 3,000 Ukrainian hryvnias (about 95 euros) are required for a prisoner of war for food, clothing, hygiene products, water and electricity. On top of this, medical products, drugs and employee wages are added.

Deputy Justice Minister Olena Vysozka told DW that the expenditure was justified, as the detention conditions of prisoners of war must comply with the Geneva Convention. She also said that Russian detainees must be in good health and well-being in order to be exchanged with Ukrainians captured by the Russians.

CLAIMS OF IRROR TREATMENT AND TORTURE

Matilda Bogner, Representative of the United Nations Office for Human Rights in Ukraine, told DW that the detention conditions of Russian POWs were generally satisfactory. However, according to Bogner, UN monitors have also received information on allegations of ill-treatment and torture of Russian soldiers after their capture.

Bogner said there is evidence that Ukrainian POWs in Russia and in the Russian-controlled areas of Ukraine were tortured immediately after their capture. “There is a lack of food and hygiene, and the treatment by the guards is harsh,” said Bogner.

The UN called on both sides to humanely treat prisoners of war and to promptly and effectively investigate all alleged cases of torture and ill-treatment. There are no official figures on how many Russian soldiers are detained in Ukraine. Their numbers are constantly changing due to regular exchanges.

‘I WILL NEVER SERVE THE ARMY AGAIN’

“Hope never dies,” says 20-year-old Dimitri, who is still waiting for a prisoner exchange. After three months in captivity, all he wants is to go back home. And he adds that he never wants to serve in the army again.”

Before completing his consultations, the American envoy leaves Sudan

7 billion.. This is how Washington will dispose of Afghan funds deposited with it

Ukrainian town on the line of fire.. Horror, shells and underground escape

The Champions League has arrived in Fenerbahçe, it’s Jorge Jesus’ turn!
May 22, 2022

Istanbulites beware! Some roads will be closed to traffic tomorrow
May 14, 2022

Istanbulites beware! Some roads will be closed to traffic tomorrow

In Germany, the murderous father was terrified! He slit his daughter’s throat and threw his son from the balcony
May 13, 2022

In Germany, the murderous father was terrified! He slit his daughter’s throat and threw his son from the balcony

Veteran goalkeeper who fell ill during the match dies
May 11, 2022

Veteran goalkeeper who fell ill during the match dies

Without Ja Morant, the Grizzlies hold on to the series, outpacing the Warriors
May 12, 2022

Without Ja Morant, the Grizzlies hold on to the series, outpacing the Warriors

Dentist murder in Kadıköy: One person is in custody

A “dramatic” moment for a Russian helicopter… a video of what happened on Snake Island
May 8, 2022