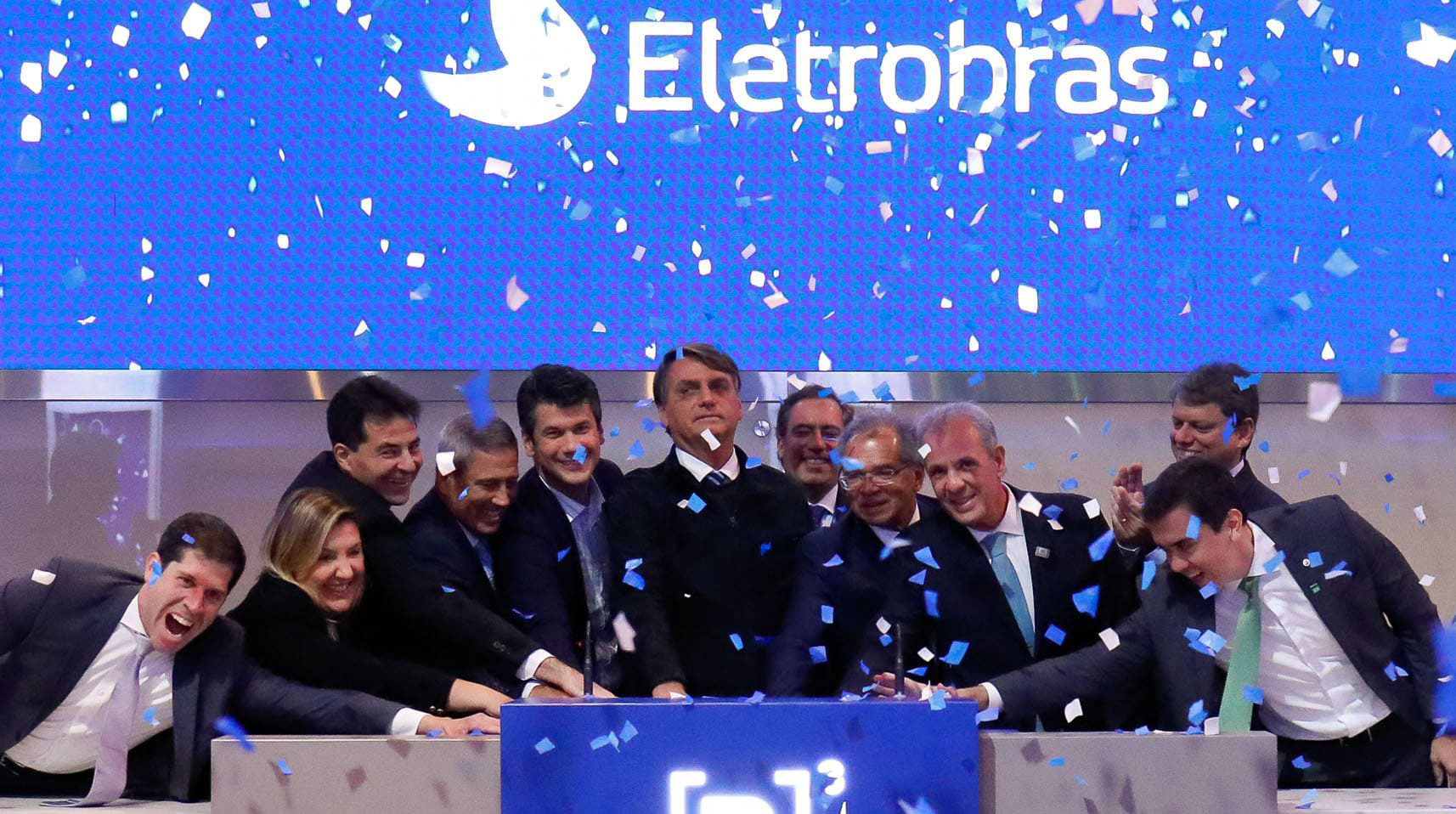 The Brazilian government staged this Tuesday at the São Paulo Stock Exchange the start of the final stretch of the privatization of Eletrobras, the largest energy company in Latin America. The traditional act of ringing the bell was attended by President Jair Bolsonaro and the Minister of Economy, Paulo Guedes, who celebrated the capitalization of the company after two and a half years of procedures. The minister argued that the company was losing strength because it no longer had the capacity to invest. Privatizing it was the solution.

After 60 years, the Brazilian State is no longer the majority shareholder of Eletrobras, a company with 14,000 workers and that closed 2021 with a profit of 5,700 million reais (1,094 million dollars, 1,050 million euros). When the privatization process is over, in the coming weeks, the Brazilian government’s share will go from 72% to 45%. The public offering of shares raised 29.29 billion reais (5.724 million dollars, 5.495 million euros), with each share trading at 42 reais (8.2 dollars, 8.9 euros). This is the largest offering of shares on the Brazilian Stock Exchange since the mega-capitalization of Petrobras in 2010.

“The mission is to leave this legacy for future generations. It is the largest clean and renewable energy generation company in the world that is free. It is like a son who left home at the age of 18 and went looking for life. Now it will expire and it no longer needs to be under the protection of the State,” said Guedes, who added that the company is “a guarantee of Brazil’s energy security.”

The Minister of Mines and Energy, Adolfo Sachsida, affirmed that privatization will benefit the final consumer, reducing hydrological risk (Brazil’s dependence on water from dams and the weight this has on the bill), for which he predicts decreases in the fees. In addition, he stated that, from now on, the company will have the obligation to invest 8.7 billion reais (1.7 billion dollars, 1.631 million euros) in projects in the north, northeast and southeast of the country. The privatization also includes a commitment to restore the San Francisco River Basin and more investments in renewable energy.

The Government presented the Eletrobras privatization project to the National Congress in 2019, and although it overcame slow parliamentary procedures and had the approval of the Court of Accounts of the Union on two occasions, it is not yet fully completed. The CEO of Eletrobras, Rodrigo Limp, explained that the expectation is that it ends “at the end of July”, after the approval in the assemblies of each of the companies that make up the electrical giant; Chesf, Eletronorte and Furnas.

The PT sees a process “full of irregularities”

The privatization of Eletrobras is the most important achievement of the liberal agenda of Guedes in the Government and takes place in discount time, just over three months before the presidential elections, which, according to all the polls to date, could return former president Luiz Inácio Lula da Silva to the Planalto Palace.

The leader of the Workers’ Party (PT) was opposed to the privatization of Eletrobras from the beginning because he believes that the Government would lose the ability to carry out social programs such as ‘Light for all’, which brought electricity to the poorest households. Last week, one of his main interlocutors, former minister Alexandre Padilha, assured in a meeting with businessmen that the privatization process could be contested in court. “The investor who puts money into this privatization full of irregularities may be shooting in the air,” he warned.

However, he clarified that if the privatization is confirmed, a possible Lula government would not reverse the sale of the shares. At the gates of the São Paulo Stock Exchange, this Tuesday, dozens of demonstrators protested against what they consider an attack on national sovereignty.

subscribe here to the newsletter of EL PAÍS América and receive all the key information on current affairs in the region.

The Catalan plunder of Valencian and Majorcan literature (2)

Ukraine: The Twenty-seven brush the agreement for a partial embargo of Russian oil | International

By admin
Recent Posts
Latest News
Facebook Twitter WhatsApp Telegram
Back to top button
Close
Featured Posts
Several students expelled from the hall of residence for the macho yelling at their classmates
October 6, 2022

North Korea confirms the launch of the most powerful missile in its history, ‘the monster’ Hwasong-17 | International
March 25, 2022

North Korea confirms the launch of the most powerful missile in its history, ‘the monster’ Hwasong-17 | International

A famous doctor, a billionaire and an extreme trumpist compete in the Republican primaries in Pennsylvania | International
May 17, 2022

A famous doctor, a billionaire and an extreme trumpist compete in the Republican primaries in Pennsylvania | International

Unionists and republicans of Northern Ireland give themselves a truce to receive Carlos III | International
September 13, 2022

The constitutional referendum divides even the Discalced Carmelite nuns in Chile and unleashes a religious debate
August 27, 2022

Russia dismisses the general in charge of Army logistics after setbacks in Ukraine | International
September 24, 2022

Riot in Ecuador: the confrontation in the Santo Domingo prison, in pictures
May 10, 2022

Riot in Ecuador: the confrontation in the Santo Domingo prison, in pictures