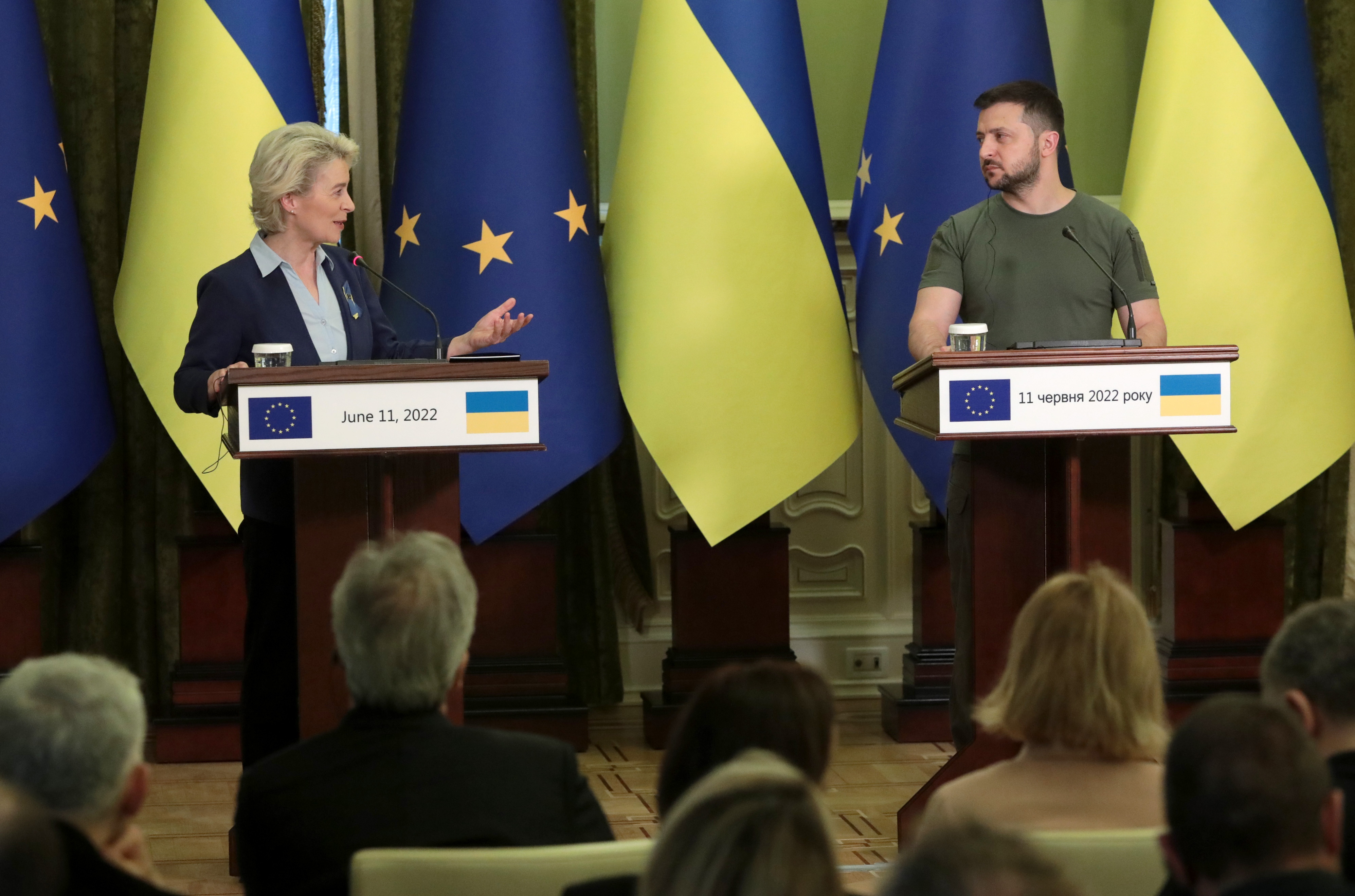 After spending eight intense hours on Saturday in kyiv, the President of the European Commission, Ursula von der Leyen, got back on a train and started, in the late afternoon, on her way back to Brussels with a positive image of the journey Ukraine has taken to achieve its status as a candidate country for the European Union. The Community Executive plans to finalize its opinion on this first step for accession throughout the week and make a decision on Friday. Although the die is not yet cast, everything seems to indicate that Brussels will opt for a positive recommendation with nuances and conditions.

“Ukraine has achieved a lot in the last ten years and there is still a lot to do,” Von der Leyen assured a group of international media, including EL PAÍS, on his way back from kyiv to Poland, after having held a intense meeting with the president of Ukraine, Volodímir Zelenski, and with his prime minister, Denis Shmihal. “Our opinion will carefully reflect it,” added the German.

After the positioning of the Executive arm of the EU, it will be up to the Member States to decide unanimously to grant Ukraine official status as a candidate country; The issue will be one of the main and probably divisive dishes to be debated among the leaders of the Twenty-seven at the summit to be held in Brussels on June 23 and 24. President Zelensky claimed this Saturday, in an appearance with Von der Leyen in kyiv, the EU’s support for his candidacy in what he hopes will be a “historic” summit.

“The challenge will be to leave the council with a united position, reflecting the greatness of these historic decisions,” Von der Leyen told the international press on his return from Ukraine to the EU. “I hope that in 20 years, when we look back, we can say that we did the right thing.” For the president of the Community Executive, the transition to the community bloc is known: “It is based on merit.”

The Commission is aware that there is still work to be done to refine the chorus of voices from the 27 community capitals: there are a good handful of countries against the candidacy (such as Sweden, Denmark, the Netherlands or Portugal) and several skeptical voices ( Germany and Austria, among others). The Executive prepares its decision on Ukraine in an argumentative manner, in what is expected to be a long and dense communication, which recognizes the achievements of a country that has been approaching the Union for years, despite being today traversed by war. It will also highlight the points where you still fall short of community standards.

“Ukraine was already on the right track before the horrible and atrocious invasion by Russia,” Von der Leyen stressed on Saturday in his speech, together with Zelensky, at the presidential complex in kyiv. “Ukraine is a presidential, parliamentary, solid and well-established democracy”, he added, “it has well-established institutions, an Administration that works at all levels”. In any case, for Von der Leyen, Ukraine still needs progress. “More needs to be done,” he said Saturday, pointing especially to the rule of law and corruption.

The former Soviet republic officially requested the candidacy shortly after Moscow ordered its troops to invade the country at the end of February; In April, von der Leyen traveled to kyiv (his first visit during the war; this was his second) to hand-deliver a lengthy questionnaire to Zelensky to initiate the candidacy. The Ukrainian government returned it in full 10 days later. Since then, the Commission has urgently studied the file in order to be able to issue its assessment this week, with an eye toward the next European Council.

Germany facing the first winter without Russian gas: reserves at 85% and supply from Norway and the Netherlands | International

Ukrainian anarchists take up arms against the Russian invasion | Videos

“We will stop being the red spot on the electoral map”

Juan Orlando Hernández will be extradited to the United States | International
March 29, 2022

Juan Orlando Hernández will be extradited to the United States | International

A motion of censure knocks down the Government of Montenegro | International
August 20, 2022

A motion of censure knocks down the Government of Montenegro | International

The Red Cross considers the clashes between FARC dissidents in Colombia to be an armed conflict | International
March 24, 2022

Zelenski, after a Russian attack on a shopping center with a thousand people: “The number of victims is impossible to imagine” | International
June 27, 2022

Zelenski, after a Russian attack on a shopping center with a thousand people: “The number of victims is impossible to imagine” | International

Brussels rewards Poland’s turn with the approval of 35,400 million for its recovery plan | International
June 1, 2022

Brussels rewards Poland’s turn with the approval of 35,400 million for its recovery plan | International

The Olympic sports with which to burn more calories
September 29, 2022

The Olympic sports with which to burn more calories

Charles of England, the eternal heir before Elizabeth II’s long goodbye | International
May 15, 2022

Arrigo Sacchi: “Football is the mirror of Italy, a country that has confused values” | International
September 22, 2022

Arrigo Sacchi: “Football is the mirror of Italy, a country that has confused values” | International

Chile: Easter Island is left without tourism: “The situation is one of collapse” | International
April 16, 2022

Chile: Easter Island is left without tourism: “The situation is one of collapse” | International