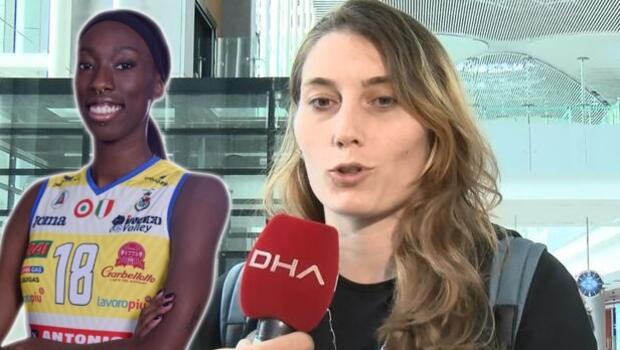 Defeating the Italian team Imoco Volley 3-1 in the Women’s CEV Champions League Super Final, VakıfBank became the champion. VakifBank captain Melis Gürkaynak, who came to Istanbul Airport by plane departing from Ljubljana, the capital of Slovenia, made a statement.

Expressing that they are very happy with the championship, Melis Gürkaynak said, “We are very peaceful because we started with the goal of 5 trophies at the beginning of the season. We returned to our country, and we are also proud that we were able to bring this trophy.”

“THIS SEASON WILL BE UNFORGETTABLE FOR ALL PLAYERS”

Underlining that there are many returns this year, Melis Gürkaynak said, “I think it is very meaningful for us in that sense. VakıfBank is a club that has finished such seasons in this way. We have had such seasons before. But I am sure this season will be unforgettable for all players. As I said. “We made a lot of comebacks. We made very important comebacks both in the Fenerbahce match, in the Champions League, in the Turkish League and in the Turkish Cup. It was very meaningful for us,” he said.

“Of course, there will be those who leave at the end of the season”

Speaking about the names that will leave the team, Melis Gürkaynak said, “Such things happen at the end of every season, professional life. We stay friends until the end, but of course, there will be people who leave at the end of the season.”

“VAKIBANK WILL RUN FROM SUCCESS TO SUCCESS WITH ITS PAOLA EGO”

Melis Gürkaynak, about Paola Egonu from Imoco Volley, said, “Our President announced yesterday, I hope VakıfBank will succeed with him. I always say that the important thing in VakıfBank is not the players, there is always an organization and system here, every player, every player The coach joins this wheel and does his best for VakıfBank’s success,” he said.

Melis Gürkaynak: “We made a lot of comebacks this season. It has been very meaningful for us… There will be people who left at the end of the season, but we remain friends after all. In VakıfBank, it is the system that matters, not the players…” pic.twitter.com/bmxnRQLvDC

Letter from Biden to oil companies

Europe is waving the “last option” to punish Russia

The inhuman attitude of the Modi government in the US report: Hospital ban for Muslims

Worker slaughter from Netflix, which has lost subscribers
May 18, 2022

Worker slaughter from Netflix, which has lost subscribers

The field suddenly turned into a ring! Kicks flew…

Joint committee from Turkey, Sweden and Finland: Promises are on the table
3 weeks ago

Joint committee from Turkey, Sweden and Finland: Promises are on the table

Last Minute: After the Arda Turan crisis in Galatasaray, an incident was claimed about Domenec Torrent! He hasn’t forgotten the photo with Fatih Terim… In the last training when you feel it…
May 18, 2022

Last Minute: After the Arda Turan crisis in Galatasaray, an incident was claimed about Domenec Torrent! He hasn’t forgotten the photo with Fatih Terim… In the last training when you feel it…

Last minute: Congratulatory announcement from the captain pilot to THY EuroLeague champion Anadolu Efes
May 22, 2022

Javelin thrower with Down syndrome is preparing for the world championship – Last Minute Turkey News
May 14, 2022