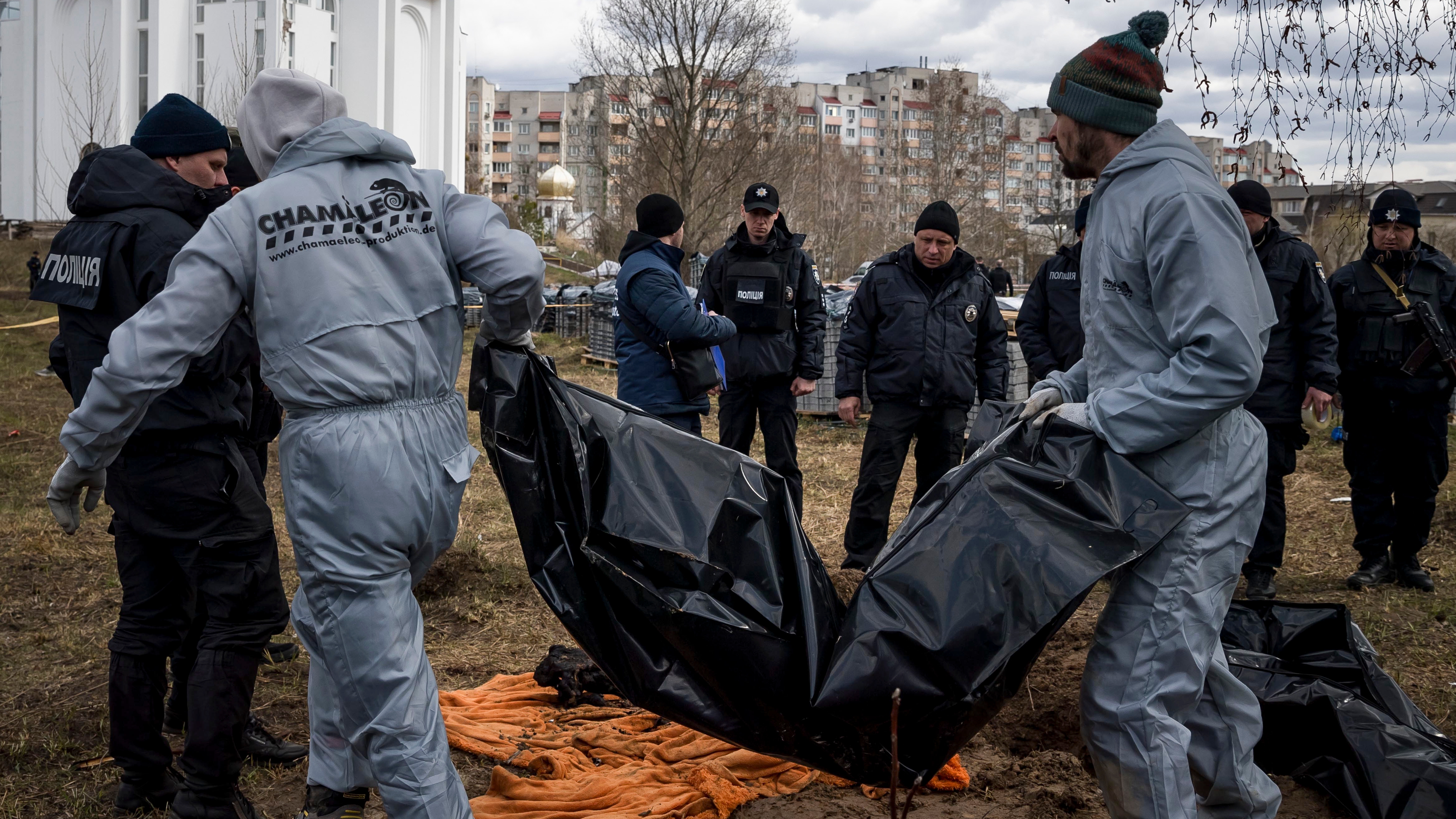 Four agents of the scientific police, four civil guards specialized in weapons and explosives and 39 forensic experts will travel to Ukraine in the coming days to help clarify possible war crimes, waiting for the International Criminal Court (ICC) or the Prosecutor of Ukraine finishes defining its mission. The four specialized agents of the General Police Station of the Spanish Scientific Police will collect all kinds of “traces, discoveries and evidence” that can help clarify the deaths that have occurred since the Russian army began its invasion more than two months ago. The agents of the armed institute will analyze the ammunition used and the consequences of the attacks. And the coroners will identify the victims, determine the causes of their deaths and show whether they have been tortured or raped. For the first time, as announced to EL PAÍS by the Minister of Justice, Pilar Llop, “war crimes will be investigated from a gender perspective.”

“Our mission is to bring the crime scene closer to the Court [Penal Internacional] to judge whether war crimes have occurred”, explains Commissioner Silvia Pérez, head of the Central Unit for Operational Coordination of the Scientific Police. The police, with forensic specialization, form part of the Police Support Team (EPA) who, for the first time, will work as such in a war zone. Together with them, it is planned that 39 forensic doctors, dependent on the Ministry of Justice, will travel and work.

“Common graves will be analyzed, bodies will be identified, traces and ballistic elements will be collected, everything that may be revealing or indicative of how the death occurred will be photographed and recorded to compile reports that can serve to clarify what happened in each case” , details Perez. “We are going to participate in the technical investigation and identification of victims,” ​​she specifies.

This Spanish team, which responds to Ukraine’s request for support and will be available to the court in The Hague, will initially have eight agents, four policemen and four civil guards, apart from forensic experts. It was activated last week by means of an instruction signed by the Secretary of State for Security of the Ministry of the Interior, Rafael Pérez. And it is made up of members of the National Police and the Civil Guard belonging to the Scientific, Judicial and Investigative Police units, as well as specialists in deactivation of explosives and technicians in Nuclear, Radiological, Biological and Chemical incidents (NRBC units).

“It is not the same to investigate a mass grave in which you participate in the unearthing, with side corridors so as not to disturb the place, than to arrive when it is already open. We will work as best we can”, continues the commissioner. “It may happen that the dating cannot be done if the scene is manipulated, but it can be seen if the victims have died by crushing or by firearm, for example,” she explains.

The four agents of the Civil Guard specialized in the deactivation of explosives “are yet to be determined,” says Commander Javier Medina, responsible for the specialty and the members who will be deployed in the team. “Our work will consist mainly of collecting samples, evidence and techniques related to the ammunition used, together with the corresponding reports on the effects they may have caused,” he explains, although he acknowledges that it will be the first time they work in a war scenario ( ”our specialty is terrorist attacks”) and that they are still waiting to find out the type of support that is required of them.

The Police Support Teams (EPA), of a multidisciplinary nature, were created by the Ministry of the Interior in 2006, after the brutal attacks of 11-M, given the possibility of major terrorist attacks and so that the agents could infiltrate. Its main objective was the investigation of serious crimes within the framework of International Law. And its initial vocation, promoted by the then Minister of the Interior José Antonio Alonso, was to join a European force. They are made up of police officers and civil guards from Information, Scientific Police, explosives deactivation (Tedax) and specialists in chemical, nuclear and bacteriological attacks.

“Our work is focused on analyzing the war scenario, especially hard and difficult, but after all the scene of a crime in which, on the other hand, it is difficult to think of finding the direct author of the death of the victim. ”, says Commissioner Pérez. “But it’s about finding enough clues that allow us to show what happened, how and when,” she insists. “The passage of time on the facts makes work difficult,” she warns. “In Kosovo, reports were made with the summary of all the intervention that was carried out, the number of graves that were accessed, the people that were found, the ballistic remains …”, she recalls about a similar intervention.

For its part, the Ministry of Justice activated the National Technical Commission for events with multiple victims, in which there are forensic experts in different areas (anthropologists, dentists and clinicians) in order to have a list of specialists available to join The mission. “Many of them already have experience in conflict zones, because they were in the former Yugoslavia, or in tsunamis like the one in Thailand or in major attacks,” explains forensic doctor Rafael Bañón, advisor to the General Directorate for the Public Service of Justice .

“The mission is what will determine the work to be done in the area, according to the Minnesota Protocol, which marks —with a scientific systematic and criminalistics means— the work in investigations of armed conflicts and scenarios in which a massive violation of human rights has been produced with summary executions”, says Bañón, who recalls that work is being done in coordination with Police and Civil Guard. “The usual thing is that the forensic experts come at the end of the conflict, this is not the case here, although we are supposed to go to places where security is already guaranteed,” he warns. The work of forensic experts will be crucial to identify the victims and show the causes of their deaths, as well as to show -if they have occurred- ill-treatment, torture, rape and sexual assault, or the use of weapons. chemicals.

At the moment, members of the French gendarmerie are already working on the ground and it is expected that, as from Spain, specialists from other European countries will attend for the same purpose. The members of the Spanish team will travel to Ukraine in “the next few days”, although “for security reasons, aspects such as the dates of deployment and the specific territory in which it will operate are reserved”, government sources point out. The passage of time works against him.

Spain is going to prepare a Specific Coordination Plan (PEC) that will include an intervention protocol at the request of the prosecutor of the International Criminal Court (ICC) of Spanish experts in tasks of collecting, analyzing and processing evidence, including conducting interviews to victims and witnesses, as well as criminal investigation work on the commission of sexual crimes, gender violence and crimes against minors.

“It is essential that the work be carried out in a coordinated manner. In addition to the Ministry of Justice, the Ministry of Foreign Affairs, the Interior, the Presidency and the Civil Service will participate. We are going to make all the necessary efforts to give a due response to the request that sends us the International Criminal Court and the Ukrainian Prosecutor’s Office,” says the Minister of Justice, Pilar Llop.

As the minister explained to EL PAÍS, “in addition to traditional research in this type of situation, we want to introduce research with a gender perspective in relation to the violent deaths of women in the context of the conflict, which would include, in addition to the analysis of the situation, investigation of concurrent elements such as sexual violence, trafficking and femicides, among others”.

“We cannot ignore the fact that gender-based violence is a threat to society and an indisputable violation of human rights, a situation that is clearly aggravated in conflict situations such as the one Ukraine is experiencing,” she stressed.

From Justice, he assures, a Single Legal-Forensic Coordination Authority will be proposed to lead a multidisciplinary team of forensic experts and other professionals. “We will make the capacities of our National Institute of Toxicology and Forensic Sciences, internationally recognized and of whose professionals we should feel very proud, available to the ICC and the Ukrainian Prosecutor’s Office, and for this, we are going to propose the signing of a Memorandum of Understanding o International Administrative Agreement that is approved between the Government of Spain and the ICC”, he announced.

According to Llop, the participation of the Spanish forensic experts (who have volunteered from all the autonomous communities) is oriented “not only to gather evidence, but also to make it valid as evidence before the ICC.” And he recalls that some of them have experience and participated in cases such as the indictment of Serbian leader Slobodan Milosevic.

From Maria to Fiona: the nightmare of the hurricanes repeats itself in Puerto Rico | International

Asylum applications increase by 90% in the European Union | Spain

the deluge will delay the start of the Formula 1 race online, live

The left opens an unprecedented path in Colombia with Petro at the forefront
August 8, 2022

Europe can take advantage of the mobilization that Putin is preparing | International
September 22, 2022

These are all the delays affected in the calendar of the Marvel Cinematic Universe
October 12, 2022

Video analysis | What good have the sanctions against Russia been for 100 days after the start of the war? | International
June 8, 2022

Video analysis | What good have the sanctions against Russia been for 100 days after the start of the war? | International

The Leroy Merlin roller blind that is flying off the shelves
October 3, 2022

The Leroy Merlin roller blind that is flying off the shelves

Homelessness for asylum seekers sparks crisis in the Netherlands | International