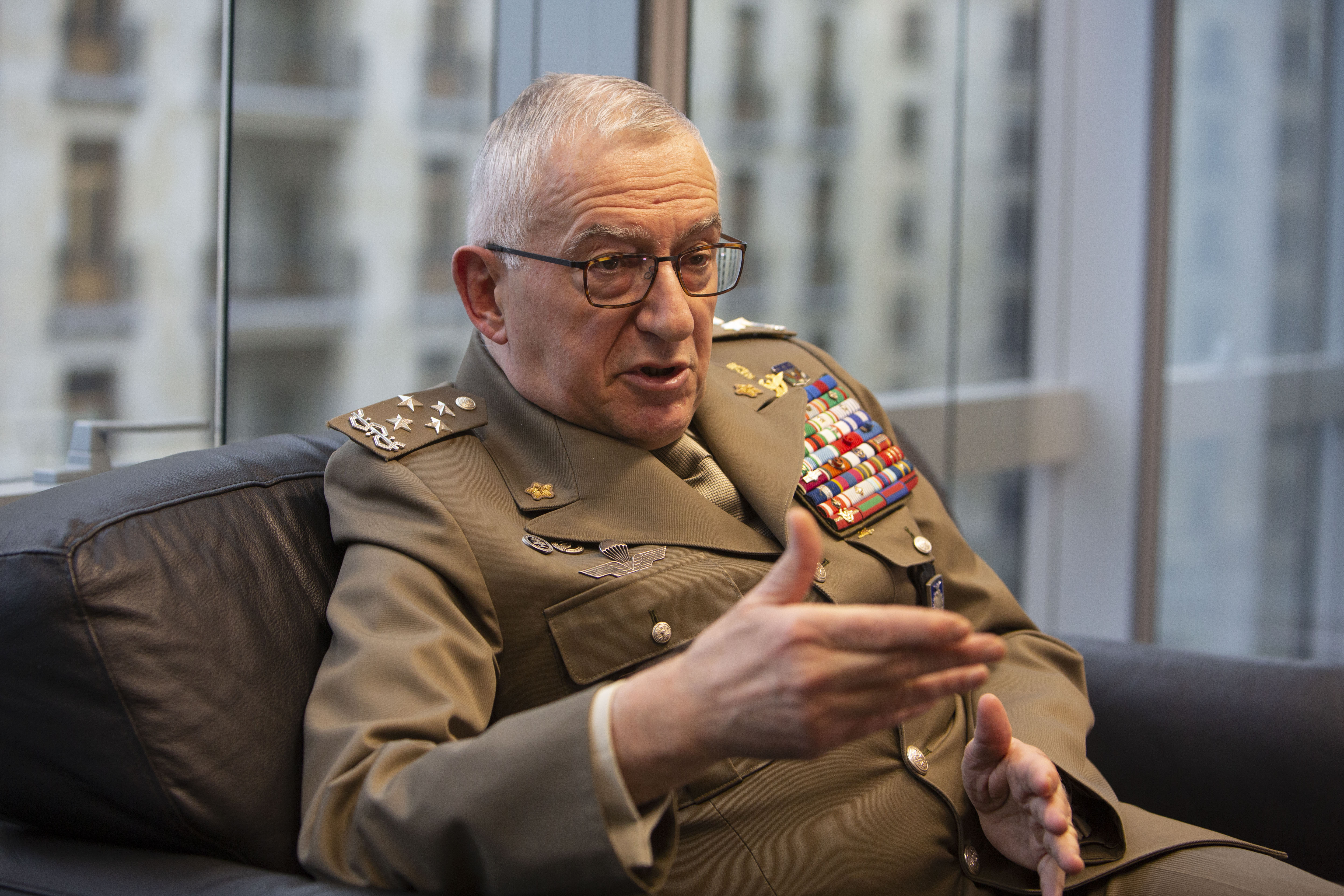 General Claudio Graziano (Turin, Italy, 68 years old) chairs the Military Committee of the European Union, the highest military body of the Twenty-seven. “I am the oldest and highest ranking, but also the oldest of the generals in service in Europe,” he defined in an interview with EL PAÍS held this Tuesday in his office in Brussels. He has been since February 24, when Russia invaded Ukraine, practically meeting in a crisis cabinet with the top leaders in Brussels. In his opinion, Moscow has failed in the initial phase of the war. “Putin thought it was going to be a quick, cheap and easy campaign, without much loss, immediately winning his targets, but it has turned out just the opposite,” he says. “If they don’t get support in a few months, they will run out of resources.”

Ask. How long will the war last?

Answer. In 50 years of career I have never seen war so close and so threatening to Europe. It is a real fight, with tanks, planes, which has turned back the clock of history 70 years. It has been three weeks now and it is extremely difficult to predict its duration. It is a war of aggression against a free country carried out by a much larger one with a much more powerful army. But the Russians have not been able to immediately achieve their goal; we could call it plan A: besiege kyiv to overthrow the government and achieve their immediate objectives in Donbas. This first phase has failed.

P. What has happened afterwards?

R. They have switched to a second phase, with new means and other weapons – if you like, a very indiscriminate war, although still limited – but that too has failed. We have seen three lines of penetration from the north towards the center of gravity of kyiv. From the south to take control of the Black Sea; in the northeast and southeast from the Donbas, in order to gain ground. But they have suffered heavy casualties, logistical, supply and human losses. They need to recover and reorganize, so they are now performing an operational shutdown.

P. How do you assess Ukraine’s military response?

R. The Ukrainians have shown an unpredictable will and ability to fight, to resist, to use the air defense system. It can even be said that [los rusos] they are trying to avoid entering the cities and now they are waging a war of attrition: instead of launching an offensive, they are trying to buy time in order to get supplies. The Russian army is probably not strong enough to launch an offensive, nor is it so well equipped and technologically developed, and perhaps it does not have the same will to fight as we thought.

P. What has gone wrong with your plans?

R. They have underestimated the quality and capacity of the Ukrainian army, and also the strength of its people. I have sometimes made the comparison with the Afghan army that melted in the sun in Kabul: it was relatively strong, but it had no hope, because its president fled. Instead, the Government and the President of Ukraine [Volodímir Zelenski] they remain in their place and motivate the people, and the Armed Forces have shown hope and the will to defend the country. It was the main mistake [de los rusos]. Not having been able to immediately overcome the Ukrainian defense, they have not gained superiority, which is very important for this battle. And it has forced them to readjust, probably even the information that was given to soldiers and commanders.

P. Has he disrupted Russia’s plans?

R. What Putin thought was going to be a quick, cheap and easy campaign, without much loss, immediately winning his objectives, has turned out to be the opposite: it has been stopped. Time has not played in favor of Russia. The Ukrainians have become stronger and the world has reacted. The EU has begun to speak with one voice on common defense and NATO has found new cohesion. So also the psychological effect has been the opposite: it has compacted the EU and the same happens with the Ukrainians, cohesive to fight against an aggressor. Perhaps even the aggressor has realized that he is an aggressor, as evidenced by the fact that they are talking about using mercenaries from abroad. This, in a way, is an escalation because they do not follow the rules of war.

P. How long can the situation last?

R. Of course, we always hope that the negotiations will continue and that we can find a diplomatic solution, even if the path is narrow. From a purely military point of view, time is dictated by the availability of equipment, weapons, soldiers and will. To what extent do the will and capabilities of the Ukrainians exist? It can be a few weeks, technically, or a very long time. Ukraine’s president recently said that all citizens have the right to take up arms against the invasion, which is, by definition, a sacred duty of all countries. That means there are maybe 40 million people ready to lead a resistance. What kind of resistance? I do not know. Now we run the risk that a trench will open permanently dividing the world again, and that, even if the war ends physically, it will continue in other forms. It’s not over yet. It is not even certain that the Russians will conclude successfully because the situation may lead them to exhaust all resources. But even so, it will be long. The Russians, of course, are strong.

P. The press has pointed out that Russia has asked China for help.

R. It’s not really confirmed. But it is very important to know what China’s position is going to be because now we are looking only at Russia and Ukraine, at the EU and NATO. But already in 2021 we were living in a very dangerous time. China wants to become the most powerful country in 2049, using a completely different system than Russia; it wants to be a powerful nation in military terms. Her position is going to be extremely important in the balance of power. But, as far as I know, they are not planning to supply the Russians. Beyond this, it is indisputable – it is my personal opinion – that probably the president of Russia and Xi Jinping [el de China] have spoken before and during these events.

R. They said they don’t need anything. But now we go to another point; Russia has successfully run hybrid operations for many years: Georgia in 2008, Crimea in 2014, Syria in 2015 with Spetsnaz [fuerzas especiales]in Libya with Wagner [empresa de mercenarios], Central Africa, Mali… They are building a strong army and have a stronger nuclear power, and for these types of efforts Russia’s balance of defense is sufficient. We are talking about 60 or 70 billion euros, which is less than the EU expenditure of 250 billion. But the amount of money Russia spends is surely insufficient to maintain a nuclear capability, to develop an advanced weapons system, to support the long-term war. They certainly need [recursos]. They are not as strong as we generally think. They are powerful. They have a mix of power and tanks, but they don’t have the same level of technological development as Western countries. So if they don’t get someone’s support in a certain number of months, they’re going to run out of resources, that’s for sure.

P. Do we have to fear a nuclear incident?

R. Look, I’m always worried about all kinds of threats that can come from everywhere. I never thought that after 50 years of career I would see Russian tanks invading Ukraine, which is within Europe. So when someone mentions, even just as a threat, that it puts nuclear resources on alert, it worries me. I don’t think it will happen, but it is a message that we have to think about because there are two words that no longer existed in our dictionary as Europeans, war and enemy, that continue to exist.

P. What message is Russia sending by attacking the Ukrainian base in Yavoriv, ​​20 kilometers from the EU?

R. First, he intends to wage psychological warfare, sending the message to the Ukrainians that there is no safe haven even in the west. On the other hand, it is also a tactical objective because there is a main line of communication for the supply of weapons and supplies that comes from the West. Also, you have to understand that since the Russians are not winning, this war of attrition ensues. They don’t go into the cities because it would be too expensive and maybe they don’t have the capacity yet. We cannot exclude that in the future they will indiscriminately launch rockets on cities and towns, against any kind of target, in an attempt to defeat the morale and spirit of the Ukrainian people and increase their casualties.

R. There is still much left to do. But the real historic change occurred on February 27, when it was decided within 72 hours to apply strong sanctions against Russia, which really put the country under siege. And, in addition, in four hours it was decided to contribute 500 million euros to support Ukraine; 450 million euros in lethal weapons. A decision that would not have been possible in the EU for decades was taken in four hours. The EU and NATO have always reacted well in emergencies. We are a bit slow during normal planning. Perhaps we were suffering from what we might call Afghan fatigue after many years there. But this point has really been like moving from the Belle Epoque to the trenches of the First World War. History has changed, this war has been a boost for common European defense. There is no doubt about it. We have understood that with a strong European defense things will be different.

Khalifa bin Zayed al Nahyan: The president of the United Arab Emirates dies at the age of 73 | International

Chile votes divided the destiny of the new Constitution

Facebook Twitter WhatsApp Telegram
Back to top button
Close
Featured Posts
Russia reservists: The EU and the US see the mobilization decreed by Putin for Ukraine as a sign of “weakness” and “desperation” | International
September 21, 2022

Russia reservists: The EU and the US see the mobilization decreed by Putin for Ukraine as a sign of “weakness” and “desperation” | International

This was the horrifying accident of Carlos Sainz in Japan
October 9, 2022

This was the horrifying accident of Carlos Sainz in Japan

Russia is willing to allow the export of grain if Ukraine agrees to demine the coast | International
June 8, 2022

A shooting at a Maryland factory leaves at least three dead | International
June 10, 2022

The Russian army assures that it has taken Lisichansk, a key city in the battle for the eastern region of Donbas | International
July 3, 2022

The Russian army assures that it has taken Lisichansk, a key city in the battle for the eastern region of Donbas | International

Fernando Alonso will win races in 2023

The cereal war in Ukraine is experienced in the countryside, decided in the ports and suffered in Africa | International
June 5, 2022

The cereal war in Ukraine is experienced in the countryside, decided in the ports and suffered in Africa | International