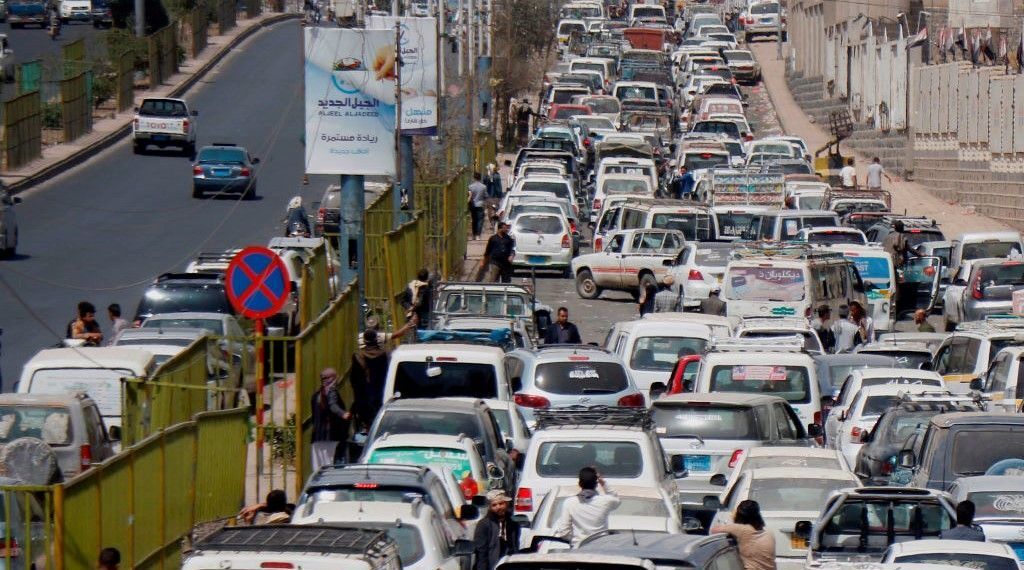 The Houthi militia continues to detain hundreds of trucks and tankers loaded with fuel, and prevent them from entering their areas of control, with the aim of continuing the fuel crisis.

Local sources said that the Houthi militia has been holding more than 600 tankers and trucks loaded with oil derivatives for a month at checkpoints called “customs ports” along the highways linking the liberated areas and the areas under their control.

The sources pointed out that oil tankers and trucks were coming from Hadramawt, Marib and Al-Jawf towards areas under the control of the Houthi militia, at a time when thousands of cars and public vehicles were queuing in front of a number of filling stations in a series of queues extending for a few kilometers.

The price of a gallon of gasoline, with a capacity of 20 liters, jumped to above 40,000 Yemeni riyals, on the black market run by Houthi leaders.

Observers made it clear that the Houthi militias deliberately create continuous fuel crises in their areas of control to exploit this politically and humanitarianly, and to harness the accumulated imported quantities belonging to their leaders for sale on the black market, where the areas under the control of the Houthis are witnessing a record rise in fuel prices in its history.

Owners of oil derivatives filling stations in Sana’a confirmed that Houthi militias detained trucks transporting them in Al-Jawf Governorate and prevented them from heading to Sana’a under the pretext of fighting smuggling and checking standards and specifications for fuel purchased at a commercial price from Mukalla in Hadramout Governorate, noting that bringing these trucks into Sana’a would end the crisis. fabricated with the aim of raising the price of these materials and selling oil shipments coming through the port of Hodeidah.

In its report sent to the UN Security Council, the international group of experts on Yemen revealed that Houthis They create a fabricated crisis in oil derivatives, in order to force traders to sell fuel on the black market they run and collect illegal money from it.

The report stated that the volume of fuel supplies by land to Houthi-controlled areas in April and May 2021 amounted to about 10,000 barrels per day, which represented about 65% of the fuel imported to Yemen, compared to supplies of 6,000 tons per day before this date. It indicates an upward trend.

The report said that the Houthis are creating an artificial scarcity of fuel in order to force traders to sell it on the black market they run, and to collect illegal fees imposed on sales, noting that the Houthis obtained official revenues from fuel imports during the year 2021 AD, estimated at 70 billion Yemeni riyals.

after use "lethal Weapon" In Ukraine.. Is it moving? "NATO" To counter Russia?

Ukraine announces the downing of 46 warplanes and 26 Russian helicopters

Canada do law "national crisis" to control the protest movement

Check Also
Close
Confession of illegitimate relationship made Esra Ezmeci crazy! Here is the disgrace of husband and wife
26 mins ago

Confession of illegitimate relationship made Esra Ezmeci crazy! Here is the disgrace of husband and wife

ÖSYM announced: Examiner fees will be updated
57 mins ago

Zelensky’s call to G7 leaders: Give more weapons
2 hours ago

If this continues, Japan will be destroyed.
3 hours ago

By admin
Recent Posts
Latest News
Facebook Twitter WhatsApp Telegram
Back to top button
Close
Featured Posts
The match of those who have shoes and those who don’t! Cihat Arslan rebelled in Yeni Malatyaspor…
May 15, 2022

The match of those who have shoes and those who don’t! Cihat Arslan rebelled in Yeni Malatyaspor…

Was Selçuk Tepeli Fired After the Incident? Flash Description from FOX Tv
May 21, 2022

Was Selçuk Tepeli Fired After the Incident? Flash Description from FOX Tv

‘Student amnesty’ statement from YÖK President Özvar: It will be on the agenda soon
2 weeks ago

‘Student amnesty’ statement from YÖK President Özvar: It will be on the agenda soon

Zelensky: Our soldiers sacrifice their lives to avoid a second Chernobyl disaster
February 24, 2022

Zelensky: Our soldiers sacrifice their lives to avoid a second Chernobyl disaster

The repercussions of Russia’s invasion of Ukraine reach space… and NASA is looking for alternatives
March 1, 2022

They don’t bargain for my freedom

Greek Prime Minister begins a visit to the UAE
May 8, 2022

Greek Prime Minister begins a visit to the UAE

Mobility in Germany: ‘security’ barrier to that meeting
May 14, 2022

Mobility in Germany: ‘security’ barrier to that meeting