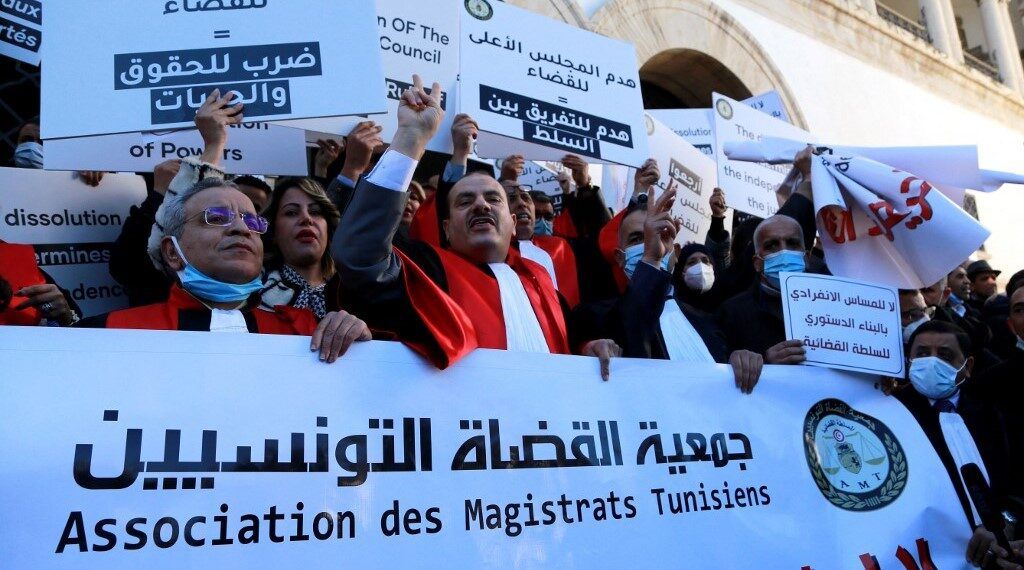 The Executive Office of the Association of Judges Tunisians And following the dangerous developments that occurred on Monday, February 07, 2022, from closing the headquarters of the Supreme Judicial Council and surrounding it with the security forces that prevented its president, members and employees from joining their offices, according to instructions from the executive authority.

And after being briefed on the content of the President’s statements on Monday evening in his meeting with the Prime Minister, approving the dissolution of the Supreme Judicial Council and replacing it with a temporary body in accordance with a decree that will be issued in the meantime, in complete absence of guarantees of the independence of the judiciary from the executive authority and in clear violation of the principle of separation of powers in the democratic system.

Recalling his firm position since the adoption of exceptional measures on July 25, 2021, which adheres to the independence of the judiciary, including its judicial, administrative and financial types, and its structures of governmental and public prosecution bodies, in accordance with the constitutional guarantees and gains set forth in Chapter V of the Constitution, and the democratic gain of the Supreme Judicial Council as an independent institution of the system of separation of powers and the balance between them that guarantees good The functioning and independence of the judiciary, and it ensures the protection of judicial bodies from falling under any pressure or interference in the professional paths of judges in a way that weakens and undermines their role in protecting rights and freedoms and the rule of law with due integrity and independence.

First: It expresses its strong rejection of what the President of the Republic has declared regarding the dissolution of the Supreme Judicial Council and the accompanying systematic mobilization campaigns for months on end against the Council, its president and its members, and against all judges of all kinds and positions, which led to slippage and serious consequences, the last of which was the threats against a number of judges. their physical safety based on their positions and positions. He stresses the seriousness of what the head of the Supreme Judicial Council has officially informed of that he has been targeted by terrorist attacks, and holds the executive authority responsible for any harm that affects him.

Second: He considers that the announcement of the dissolution of the Supreme Judicial Council as an independent constitutional institution that monitors the proper functioning of the judiciary and guarantees the principle of separation of powers constitutes direct interference in the judicial authority and undermines the system of separation of powers, the mainstay of the rule of law, and a dangerous regression from the perception of the independent judicial authority that achieves a balance between the powers and the guarantor Justice and the rule of law and its implementation to the conception of the judiciary function and the apparatus of the executive authority and subject to it, which was never established before the revolution and for sixty years for the rule of law and the judiciary that protects rights and freedoms, the guardian of public money and the capabilities of the people and the guarantor of social justice.

Third: He calls on all judges of the three judicial, administrative and financial categories to completely suspend the work of all courts of the Republic on Wednesday, February 09 and Thursday, February 10, 2022 in protest against the flagrant violation of the independence of the judiciary by the President of the Republic and the dissolution of the Supreme Judicial Council as the last guarantee for the separation of powers and achieving balance between them. Arrangements for suspension of work will be notified later.

Fourth: Announcing the organization of a protest stand in front of the headquarters of the Supreme Judicial Council on Thursday, February 10, 2022, and inviting all judicial, administrative and financial judges to participate in it extensively in their judicial uniform. It also calls on all components of civil society, the judicial and human rights family, national figures and living forces that believe and defend the independence of the judiciary and the rule of law to participate in this vigil in defense of the judicial authority.

Fifth: It is announced that a general judicial meeting of all Tunisian judges will be held in this dangerous juncture on Saturday, February 12, 2022 in Tunis, in the place that will be announced later to deliberate on the exact situation of the judiciary in light of the exceptional measures and recent decisions of the President of the Republic and ways to address them.

Sixth: He renews his call to all judges of the three categories, judicial, administrative and financial, in this delicate circumstance, to close ranks, adhere to the independence of the judiciary and protect it from any interference.

Are Putin’s decisions regarding Donetsk and Luhansk a declaration of war?

A new step by NATO after the Russian invasion of Ukraine .. Is it the beginning of the alliance’s intervention in the war?

Ukraine.. the continuation of the Russian invasion for the eighth day

Dangerous game of little boy! His body burned when he burned the gas can with a lighter
14 mins ago

Sweden’s lie revealed: It embraced the PKK again
19 mins ago

End of an era! Apple stops iPod production after 20 years

The United Nations: We support the unity of Ukraine and reject anything that violates its sovereignty
February 23, 2022

The United Nations: We support the unity of Ukraine and reject anything that violates its sovereignty

The Perfumery Division expected an increase in the price of the next Ramadan Yamish
February 12, 2022

Contrary to expectations, Putin’s speech attacks the West and justifies the Ukraine war
6 days ago

Contrary to expectations, Putin’s speech attacks the West and justifies the Ukraine war

Libya is waiting..a decisive session in Tobruk and the threat of my brothers from Tripoli
February 6, 2022

Libya is waiting..a decisive session in Tobruk and the threat of my brothers from Tripoli

First he stabbed many times and then he kicked!
6 days ago

First he stabbed many times and then he kicked!

After excluding banks from “Swift”, there is a Russian alternative that turns the tables
March 2, 2022

After excluding banks from “Swift”, there is a Russian alternative that turns the tables

LAST MINUTE | He fell from the 15th floor and died! Decision announced in Eda Nur Kaplan case
3 days ago

After a quick discussion, Putin announces sending the army to Ukraine
February 22, 2022

After a quick discussion, Putin announces sending the army to Ukraine

Libya.. “Brotherhood deception” and an “old conflict” behind the escalation against Bashagha
February 13, 2022

Libya.. “Brotherhood deception” and an “old conflict” behind the escalation against Bashagha