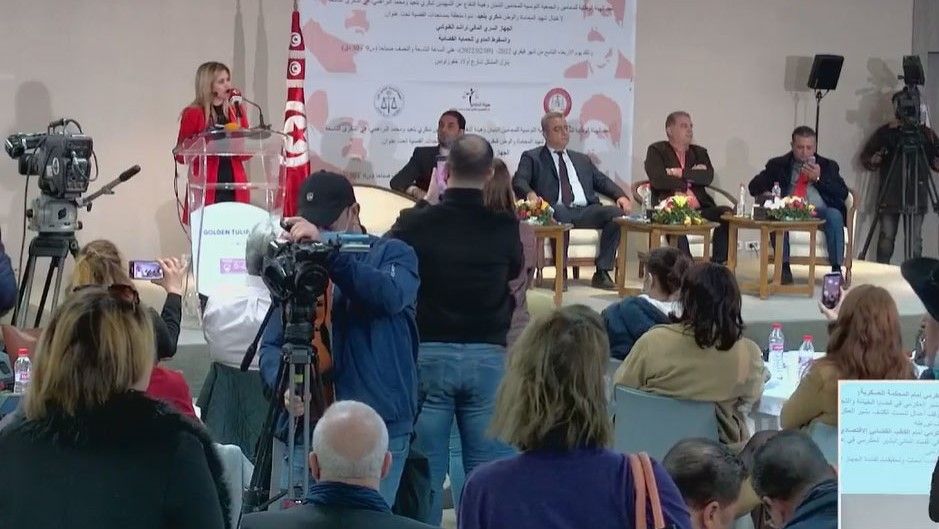 On Wednesday in Tunisia, the Defense Committee of Chokri Belaid and Mohamed Brahmi held a press conference to reveal new data regarding the assassination cases and the involvement of the Ennahda movement in them.

accused defense body During a press conference, the head of the Ennahda movement, Rached Ghannouchi, and the former president of the Tunisian Parliament, accused of money laundering, accompanied by his son, Moaz Ghannouchi.

During her presentation of the most important topics of the symposium, a member of the Defense Staff spoke about the existence of a secret financial apparatus related to Ghannouchi, in addition to communication with others in order to attack the homeland.

Lawyer Abdel Nasser Al-Aweni confirmed that the head of the Supreme Judicial Council, Youssef Bouzacher, voted against lifting the immunity against criminal prosecution from Al-Bashir Al-Akrimi, the Public Prosecutor and the dismissed former investigative judge, who is involved in crimes against state security and political assassinations in Tunisia despite the decision to suspend him from work and refer him to the Council discipline.

Al-Aweni stressed that the Supreme Judicial Council deliberately made mistakes when it decided to suspend Al-Bashir Al-Akrimi, “the republic’s attorney at the Court of First Instance in Tunis and the former judicial pole for combating terrorism” from work and referred him to the Disciplinary Council so that the latter could appeal these decisions before the Administrative Court.

Al-Aweni added that the Supreme Judicial Council is part of the problem in the case of the assassination of the two martyrs, noting that a number of its members are suspected of corruption.

A member of the defense team, Lawyer Reda Al-Radawi, announced entering the stage of field moves in order to bring down the system and bring down all the political gang, as he put it.

The authority also reported that tomorrow, Thursday, February 10, 2022, a protest stand will be organized in front of the Supreme Judicial Council, which it considered a “blind” council of the judiciary, in addition to a protest on Friday before the Court of Appeal and a third stand in front of the headquarters of the head of the Ennahda movement Rashid Ghannouchi.

She explained that complaints were filed against Ghannouchi, his son, Moaz, and against Bashir Al-Akrimi and senior security leaders.

It is worth noting that Al-Bashir Al-Akrimi was a judge working in the Tunisian governorate of Bizerte until I called him in late January 2013 to assume his duties in the capital, Tunis, specifically in the investigation office of the Court of First Instance in Tunis, one week before the assassination of politician Chokri Belaid on February 6, 2013.

Since 2016, Al-Akrimi has held the position of Public Prosecutor at the Court of First Instance in Tunis and the Judicial Pole for Combating Terrorism. This dangerous position enabled him to conceal thousands of documents related to terrorist cases and not refer them to the Public Prosecution, according to the defense of Chokri Belaid and Mohamed Brahmi.

The isolation of the judge affiliated with the Ennahda movement increased with the announcement of his placement under house arrest, which opens the way for work to uncover the truth of the abuses he committed, according to followers of his file.

This decision came based on the Tunisian Ministry of Justice’s inspection report issued in February 2021, which includes accusations of Al-Akrami of committing “violations in the judicial process of the two assassination files of Chokri Belaid and Mohamed Brahmi, covering up terrorist crimes and obstructing the investigation of thousands of terrorism-related files.”

The project to dissolve the Supreme Judicial Council

It is reported that Tunisian President Kais Saied had stated on Monday that the draft dissolution of the Supreme Judicial Council is ready and will be discussed, in the coming days, saying: “The Supreme Judicial Council has been dissolved, but I will never interfere in the judiciary, and the solution has been resorted to because it has become It is time to put an end to the farce that is happening and to listen to it.”

He stressed that some are still covering up and refusing to provide the defense team with documents that condemn those behind the assassination of the two martyrs, Chokri Belaid and Muhammad Brahmi, as well as the assassination of security and military personnel, according to him.

He said, “There are many judges who have been transferred in order to abuse them…because they were not drawn into the currents that tampered with the files inside the palaces of justice.”

Saeed also clarified that the judiciary must be at the level of the stage, saying that resorting to the dissolution of the Supreme Judicial Council in order to purify the judiciary.

Dangerous game of little boy! His body burned when he burned the gas can with a lighter
15 mins ago

Sweden’s lie revealed: It embraced the PKK again
20 mins ago

Egypt.. Extending the “exceptional decision” for wheat amid the Ukraine crisis

Will Sweden and Finland extradite terrorists to Turkey?
9 hours ago

Will Sweden and Finland extradite terrorists to Turkey?

Turkey conveyed its demands to Sweden and Finland, which want to join NATO: Here are 2 conditions that will open the door
13 hours ago

Turkey conveyed its demands to Sweden and Finland, which want to join NATO: Here are 2 conditions that will open the door

Warm messages at the Turkey-Congo summit: Our leader is grateful to Erdogan
2 days ago

Warm messages at the Turkey-Congo summit: Our leader is grateful to Erdogan

“He insulted Al-Ahly” .. controversy in Egypt because of an announcer on state TV
February 8, 2022

“He insulted Al-Ahly” .. controversy in Egypt because of an announcer on state TV

Punishment without crime.. Dostoevsky, a victim of the Russian-Ukrainian war
March 2, 2022

Punishment without crime.. Dostoevsky, a victim of the Russian-Ukrainian war

The international envoy to Yemen condemns the Houthi attack against the UAE and Saudi Arabia
February 16, 2022

Russia’s veto of a draft UN resolution on its attack on Ukraine
February 25, 2022