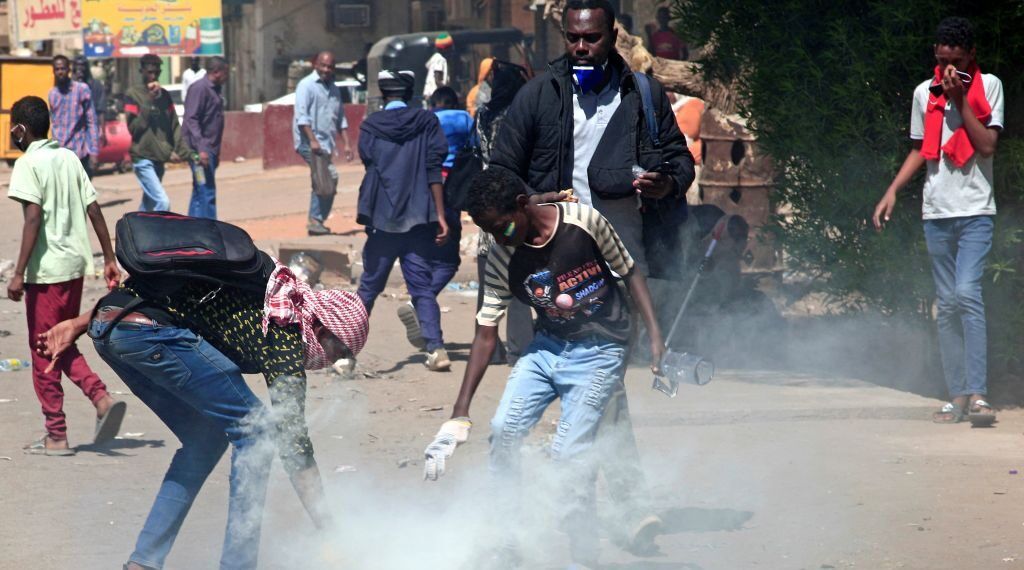 Sudanese police fired tear gas in an attempt to disperse thousands of protesters in Khartoum against the arrest campaign carried out by the army chief. Abdel Fattah Al-Burhan More than three months ago.

Police fired tear gas and colored water canisters to disperse the demonstrators, about 500 meters from the presidential palace in the center of the capital, injuring some.

Thousands of Sudanese opposed the arrests in the center of the capital and its neighboring cities, Bahri and Omdurman, to demand civilian rule and the trial of those responsible for the killing of protesters, according to agency journalists and eyewitnesses.

“The military is in the barracks and the Janjaweed are dissolved,” the demonstrators chanted, referring to the Rapid Support Forces, which emerged from the Janjaweed militias, who were accused by human rights organizations of committing war crimes in 2003 in the western Darfur region.

The protests spread outside the capital, where Khaled Youssef, an eyewitness from the city of Wad Madani, the capital of Gezira state, which lies 186 km south of Khartoum, said, “At exactly one, about 3,000 demonstrators gathered. Some of them carried Sudanese flags and pictures of the martyrs and began chanting No, no to the rule of the military.”

Monday’s protests come days after thousands of Sudanese army supporters demonstrated in front of the United Nations mission in Khartoum, some riding camels, attacking what they described as “foreign interventions” and chanting, expressing their support for the army.

The United Nations is sponsoring talks aimed at finding a solution to the crisis and has consistently urged the authorities to refrain from using violence to end political protests.

As before, during pro-army demonstrations, some of the participants attacked a number of journalists.

Sudan has witnessed continuous protests interspersed with unrest and violence since the arrest campaign carried out by army chief Abdel Fattah al-Burhan on October 25, when he overthrew civilians who shared power with the army after the fall of former President Omar al-Bashir.

The crackdown on demonstrations against military rule has left at least 79 dead and hundreds wounded, according to the Central Committee of Sudan Doctors.

The police deny using live bullets against the demonstrators, and say that an officer was stabbed by demonstrators during the recent protests, which led to his death, in addition to wounding dozens of security personnel.

Recently, the authorities announced that they had seized weapons that were in the possession of elements, and video clips circulated on social media showed that they had used them.

How did a camel and its owner kidnapped the hearts of the pioneers of social networking sites in Saudi Arabia?

Last minute: Historical moments in Galatasaray – Adana Demirspor match! Belhanda made a triple, Yunus Akgün scored a goal, he was not happy! Arda Turan
11 mins ago

Last minute: May 16 coronavirus case table announced! The latest in the number of deaths and cases!
35 mins ago

3 people died in Pakistan due to extreme heat

An important archaeological discovery documenting the daily life of the pharaohs
February 7, 2022

An important archaeological discovery documenting the daily life of the pharaohs

With a “slip of the tongue”… Did the intelligence chief reveal Putin’s next plan?
February 22, 2022

With a “slip of the tongue”… Did the intelligence chief reveal Putin’s next plan?

Libya on the anniversary of February… The Brotherhood was expelled from the celebrations squares
February 19, 2022

Putin and two leaders without “flags”… Will the Crimean scenario come true?
February 21, 2022

Putin and two leaders without “flags”… Will the Crimean scenario come true?

They are all students.. Details of the first trip for Egyptians returning from Ukraine
February 27, 2022

They are all students.. Details of the first trip for Egyptians returning from Ukraine

The coalition destroys Houthi military targets in the city of Al-Bayda, Yemen
February 22, 2022

The coalition destroys Houthi military targets in the city of Al-Bayda, Yemen

Quadruple .. Al-Ahly hardens Al-Hilal and scores “third in the world”

Syria.. A soldier was killed and wounded in an explosion in Damascus
February 15, 2022

Syria.. A soldier was killed and wounded in an explosion in Damascus